When Remington “Rooster” Davis was 5 years old, just a few years ago, he had a wagon made up to look like a trailer to pull behind his bicycle or for his father, Brandon, to pull around by hand.

After taking that wagon to the Guilty By Association Truck Show in Joplin, Missouri, a few years ago, the elder Davis wore himself out pulling the wagon and his two boys around the show’s expansive grounds and knew he had to come up with something to get around easier at the next event.

He initially thought of bringing a golf cart or something similar, but that idea turned into a miniature replica of his own 1994 Peterbilt 379 that the now 8-year-old Rooster Davis has taken ownership of since its completion earlier this year. As impressive as the working replica itself is, what’s more impressive to Davis is how his son has taken to the truck and made it his own.

“I’m super proud of him,” he said. “Everything he does with this truck is all him.”

Any time Rooster works on the truck or drives it, he dresses up in a nice shirt, jeans and boots with a cowboy hat.

“We don’t make him get dressed up or anything – that’s 100% Rooster,” Davis said. “He goes and gets his boots and jeans. In his mind, it goes hand-in-hand. If he’s driving his truck, he has to dress up. That’s a dying thing in the industry.”

Davis said his son would rather be doing something with the truck – driving, cleaning, polishing – than just about anything else. “He goes through more tire shine and window cleaner than I do on the big truck,” Davis said. “He’s definitely got the bug. I’m proud of him.”

The 1994 Pete that the miniature “WeePete” is modeled after was bought by Davis in October 2016 and put to work early the next year. Davis is the rig’s third owner, and he had seen the truck hauling rock around his Willard, Missouri, home base for years before buying it. At the time, it was painted teal and turquoise, but to set it apart and really make it his own, he started by painting the front fenders and tanks “Peacock Blue.” He also replaced a majority of parts on the truck, including the front bumper, stacks, headlights, rear fenders and more.

“For everything we could, we touched and put our twist on it,” Davis said. “I always hated being the guy who bought so-and-so’s truck. It doesn’t look like the same truck anymore. We put our own spin on it.”

He works the truck every day hauling granite, marble and limestone locally for building projects on a Wilson step deck.

Then in January 2020, his impressive Pete began to take a backseat to the replica, WeePete, which he built over the course of about eight months.

The process started with a flat-bottom go-kart, which Davis cut everything out of other than the front axle and the steering components. From there, it took on the look of his own 379. The body is built from race car aluminum and painted to match his truck. It also has train horns, a flip kit on the front bumper to help with its low ground clearance, breathers, 101 lights and more.

WeePete also has two six-inch tanks, one of which is a functioning air tank for the train horns. They’re painted to match the bigger 379 and also feature custom brackets that Davis made to look like tank straps. A hand brake in the mini cab is crafted to look like a shifter.

Under the hood — behind the seat to be more accurate — is a motor out of a diesel generator.

“I ran across a friend with a generator who said he had a motor for the WeePete,” Davis said. “He sent me a video, and it’s not much bigger than a 15-hp gas motor, but it was rolling coal. Black smoke was just pouring out, and I knew we had to have it. We plugged it into the stacks, and it puts out black smoke just like a big truck.”

Davis also built a replica of his Wilson step deck that Rooster pulls behind the rig in parades and at truck shows. He said trying to engineer the RGN-style setup so that the truck wouldn’t get stuck on bumps and dips in the road was a challenge.

Rooster said he played no small part during the build process.

“I helped wire the switches,” he said. “I helped build the deck on the trailer. I helped paint the truck. And I helped put on the fenders.”

All told, WeePete with the trailer included weighs somewhere around 500 pounds, Davis said. He was nervous about the weight while building it, so he bought a heavy-duty clutch and has it geared down as low as it’ll go, and also added the biggest drive sprocket he could find. With several adults on the trailer, bringing the total weight up to around 1,200 pounds, Davis clocked WeePete still running at 28 miles per hour. “I was shocked it still ran that fast,” he said. In a video recently posted to Rooster’s YouTube page, WeePete can be seen pulling a 4,200 pickup truck.

The electronics on board, such as the lights, stereo and more, are powered by two 12-volt batteries.

Davis said the goal for the truck when he started in January was to finish it by GBATS in September. However, when word came down in July that the show had been canceled due to the COVID-19 pandemic, Davis said he “lost motivation right there at the end” and took a break from finishing the build. In August, an invitation to the Laid Back on I-55 Truck Show in Perryville, Missouri, stoked the fire for him to finish the truck.

Rooster showed WeePete at the event and ended up being voted as the winner of the People’s Choice award. “It was amazing to get called up there in front of all those people,” Rooster said. “I didn’t think I was going to win that.”

Below, see more photos of Rooster and the WeePete, as well as a video of Rooster giving a walk-around of his rig. 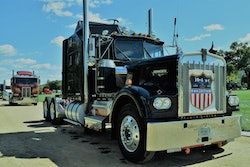 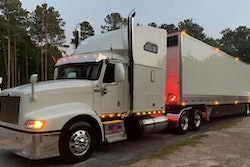 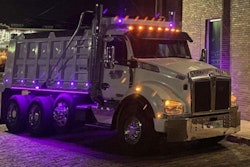 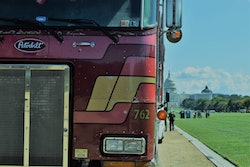