Rose Bud, Ark.-based Brad Hartwick pulled an old Kenworth out of the weeds and turned it into a rolling salute to the United States before bringing it to the Great American Trucking Show in August, where he showed it in the GATS Pride & Polish.

As Hartwick, who works as the shop foreman at his family’s McSheer Trucking, describes in the video above, the hot rod originated as a 1978 Kenworth W900A. When he started out just wanting to build something he’d never seen before. As the project went along, a friend of Hartwick’s, Navy veteran Randy Jones, gave him the idea to give the truck a patriotic theme.

The truck has been lowered about a foot, and the motor was raised about 11 inches, and the front end was stretched while moving the cab back about a foot-and-a-half so the engine sits alone up front. The truck runs off of a 350-horsepower Cummins Big Cam, a 15-speed double over transmission.

Nearly everything on the truck was custom built in Hartwick’s shop, including the bed, stacks, visor and more.

The finished product, named “Patriot,” is about as patriotic as a truck can get. It features American flag graphics on the front end of the rig, the preamble to the U.S. Constitution, the Bill of Rights and more.

The truck earned a runner-up finish for Best of Show in the Builders Class category at the GATS Pride & Polish. 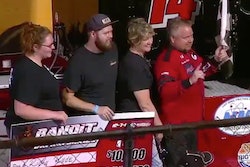 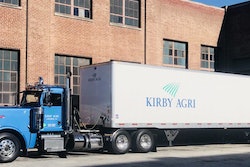 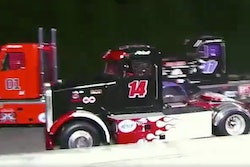