'My Last One,' a truly one-of-a-kind custom 1960 Mack B75 build from this longtime diesel mechanic

Matt Cole
Feb 3, 2021
Mike Flake built this one-of-a-kind 1960 Mack B75 over the course of two-and-a-half years. He believes from his research it is the only or one of very few B-model Macks with a stretched hood in the United States.

With 47 years of experience as a diesel mechanic – and with a few years as an owner-operator mixed in during that time – Walla Walla, Washington-based Mike Flake knows his way around a truck.

In the early 90s, he operated a 1966-model needlenose Peterbilt, which was one of the first aluminum tilt hoods sold in the Pacific Northwest when it was built. Flake was only the second owner when he ran it as an owner-operator.

He now works in the shop of 65-truck Tate Transportation, also based in Walla Walla. “We don’t run any junk,” Flake said.

He has used his knowledge of trucks to stretch somewhere around 75 trucks through the years, he estimates. But his most challenging project to date was the full-on rebuild of a 1960 Mack B75, which Flake believes is either the only or one of only a couple long-hood B-model Macks in existence.

The 64-year-old Flake said he remembers seeing the exact truck he bought running for a logging operation when he was a child in eastern Washington.

“I had a little history with the truck seeing it run when I was a kid,” he said. “It came up on Craigslist for sale, and I thought it looked like a truck out of eastern Washington – and it turns out it was. Graham Bros. Logging ordered it new from Mack in 1960.”

He said he believes the truck hauled logs up until around 1977 or 1978, running about 18 years as a logger before it did “a lot of sitting since then.”

Before Flake bought the truck, someone else had purchased it with the goal of restoring it, but he said they decided it was more than they could handle. So it sat, collecting new residents, Flake said. “It was full of yellow jackets. I couldn’t even raise the hood.”

Flake said he decided right off the bat that he’d build a stretch hood for the truck, but that’s hardly the only addition on the rig. With the various parts he pieced together to build the truck, it’s reminiscent of the 1976 Johnny Cash classic, “One Piece at a Time,” in which the song’s narrator builds a Cadillac after smuggling parts off the assembly line for years until he had a complete car.

The steering column is out of a Kenworth T800, the engine and suspension a Freightliner cabover, and various other parts came out of a Mack B61 that Flake used as a donor truck.

“Everything on it is all stuff that I knew would work and fit together,” he said. “That’s why I used it. I bought another B61-model Mack for the fenders and as a donor truck for door parts and other things. And I bought a 1980 Freightliner cabover and used the engine, rear ends, rear suspension and front suspension. It was all basically built in my head. I had plans on it that I drew out with the stretch hood and raising the cab two inches. The main construction of it was just kind of different. It’s not something most people would tackle.”

The engine he pulled out of the Freightliner was a 400-hp Cummins Big Cam II, which boasts about 160 more horsepower than an original Mack B75 engine would have had. While the engine is larger that the original, Flake said the decision to build the stretch hood was purely a design choice, not a necessity for the larger engine.

Other parts he pulled from other trucks include the visor, which he narrowed after pulling it off of a Peterbilt 379; a windshield wiper motor out of a 1952 Chevrolet pickup; the wiring harness out of a 1972 pickup; the steer axle, a Rockwell 931, from a 1979 Kenworth W900; the fuel tanks and mounts were off of a 1999 Freightliner FL80; and the steps were battery boxes off of a Freightliner Coronado that Flake made into steps by adding step material and some extensions so they fit the cab.

“All the parts and pieces I used, those were the natural parts to put in it,” Flake said. “They were what was going to work right.”

Flake also had to build a number of parts by hand himself, starting with the frame rails. He also built the front bumper, which was a chunk of stainless steel that he polished, and the grille. He fabricated the mirror brackets from square tubing. “They’re the only square tube brackets on the planet,” he said. The clutch link and throttle linkage were also built by Flake.

The cab is about the only part on the truck that’s still original The interior of the cab, however, is custom-built like most of the rest of the classic rig. He had the inside of the truck soda-blasted, then he replaced the dash, all the upholstery and more.

The most difficult part of the build, Flake said, was the extended hood. He had plans for one fabricator to do it, but COVID-19 forced layoffs at that company. Another fabricator’s rollers were too big, so they had to over-roll the hood, then pull the metal back out. “That hood tried my patience, but I couldn’t quit,” he said. “I had to finish it.”

The original hood on a Mach B75 was 49 inches long. Flake’s hood is 71 inches, with a distance from where the hood meets the cowl to the radiator of 78.5 inches.

“When you’re sitting in the driver’s seat, it’s a long way out to the nose,” he said. “It’s a pretty cool feeling driving it down the road.”

The entire build took about two-and-a-half years and was fully completed on Jan. 16. It would have been finished a lot sooner, Flake said, but delays for the hood extended the project. The frame took him about two weeks to build, then he added the air lines and wiring and had the cab ready to be placed on the frame after another two months. After that, it was a waiting game with the hood, about seven more months before it was done.

“It really drug on,” he said. “It was pretty depressing for a while. It was the last piece. I drove it around quite a bit without a hood testing it, checking things out to see what’s working right. It was easier to do it that way because with the hood on, she’s a job to get down into the engine to work on it.”

Apart from the cab and some of the clutch linkage, Flake said everything else on the truck was either hand built or from another vehicle. The only other thing to stay original on the rig is the bulldog on the front of the hood.

“It’s the most comprehensive build I’ve ever done, and I don’t know I’d ever do another one,” he said. “I added a name to the front of the hood, ‘My Last One,’ and it is. I’m too old to be monkeying around like this.”

Flake said he likely won’t keep the truck for long, as he already has a prospective buyer in Oregon who runs a construction company. 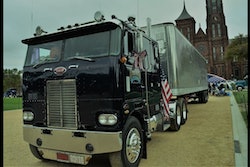 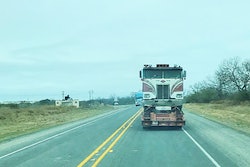 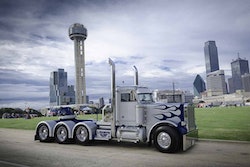