A.J. Lopez Trucking Owner Henry Lopez used some personal touches — his name and his wife’s — to set apart his 2015 Peterbilt 389 and Armorlite trailer.

The rig is competing in the PKY Truck Beauty Championship at the Mid-America Trucking Show in Louisville, Ky.

Lopez says he worked the exterior green and blue into the interior, such as on the dash and seats.

“We’ve also got my name and my wife’s name on the seats,” he says. Their names — Rocio for her, Lopez for him — also show up in light patterns installed on plates behind the wheels.

Lopez, based in San Antonio, Texas, hauls gravel and sand. 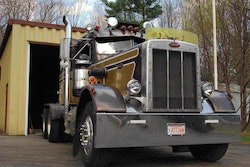 Revisiting a classic and a class act: Butch Mueller and his 1971 Peterbilt 358 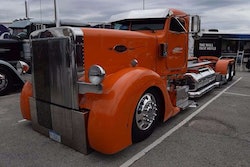 Photos: A sampling of the custom rigs on display at MATS 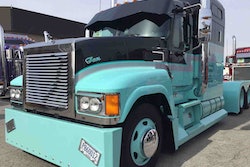 Custom parts set this Bulldog apart from the pack 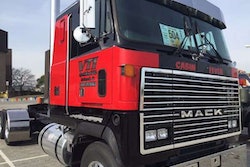