In terms of graphics, one of the most interesting trucks at this year’s Mid-America Trucking Show in Louisville, Kentucky, was “End of Watch.”

Stephanie and Jacob Robak brought their car hauler to compete in the PKY Truck Beauty Championship at MATS. The Robaks own Robak Auto Transport, based in St. Cloud, Minnesota, and are leased to Motor Car Auto Carriers.

When it came time to outfit their third truck, a 2006 Peterbilt 379, “I said that I wanted a turn designing it,” Stephanie said.

She handles the paperwork for their business, but she also works as a police officer and 911 dispatcher.

“I wanted to get everybody aware that police officers’ lives do matter,” she says. “They matter to communities that have lost them, they matter to families who’ve lost them.”

Consequently, “This truck is dedicated to the people who have lost their lives doing their jobs,” she says.

Robak came up with a design using photographs of badges and other images related to the deaths of officers – one from Cold Spring and another from St. Joseph, both in the St. Cloud region. An image on the hood shows Ranger, a service canine who died in action. 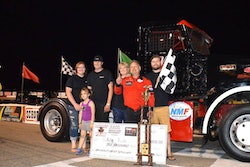 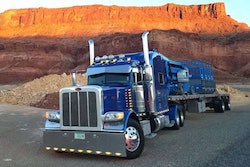 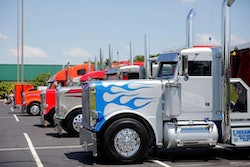