He bought the truck from California and did a motor swap, where he added a 550-hp Cat C15 with an 18-speed and 3:55 rears. He then gutted the rest of the truck and rebuilt it in time for the show. In the video above, the truck is coupled with a 6,800-gallon 2019 Walker tanker. The frame has been painted, and the end-caps are vinyl-wrapped.

Among upgrades to the truck include a new front end and interior, new fenders, tanks, step boxes and more. "Pretty much everything you can touch on it, we've kind of had off and redone," he said.

Inside the rig, Spare Time Fab did the upholstery work with white and red button-tuck. Jaeschke took out the old dash and added a new one himself, and overall 98% of the work done on the truck was done in his shop.

Jaeschke said the white-out look is something he likes the look of, but at the time of the show, he was still considering adding a stripe to it.

When Overdrive spoke to Jaeschke at the show this summer, he was running 7 trucks and 33 tankers in his fleet, in addition to owner-operators pulling for him. The fleet hauls a lot in the Midwest, but has loads going to both coasts, too. 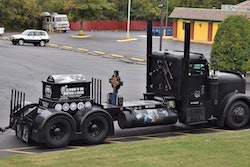 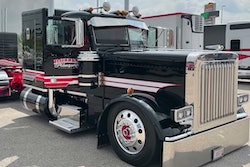 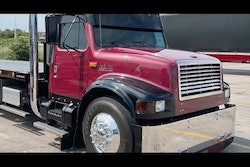