The final major deadline in implementing the electronic logging device mandate isn’t causing quite the stir as did the mandate’s initial effective date, Dec. 18, 2017. Nevertheless, for those grandfathered in to continue using automatic onboard recording devices, the impending sunset of their two-year grace period on Dec. 17 means adjusting to a device with a more rigidly detailed set of specifications that require some operational changes.

A spring survey of independent owner-operators and fleets by Overdrive and sister fleet publication Commercial Carrier Journal found 30% of respondents continuing to use legacy AOBRD systems and 11% being in transition, using both.

The AOBRD percentages totaled 65% for those two categories among fleets of more than 100 trucks. In some ways, that’s no surprise, given larger fleets were most likely to have implemented an e-log system before they were required.

The tendency to hold on to AOBRDs as long as possible, however, isn’t just a matter of avoiding the cost and trouble of adopting new technology. The most commonly reported reasons for postponing the transition illuminate the differences between AOBRDs and ELDs, from the data recorded and transmitted to the roadside officer to added driver control of all e-log edits.

ELDs’ 5-mph automatic switch to the drive line
With previous-generation e-logs, automatic duty status shifts from off duty or on duty/not driving generally were customizable, depending on the needs of the fleet and the e-log provider’s technical capabilities.

At Nussbaum Transportation, AOBRDs did not record vehicle movement less than 20 mph on the drive line within customer facilities. When Nussbaum drivers arrived at a customer location and switched from driving status to on duty/not driving status, “that was that,” says Jeremy Stickling, a vice president for the Hudson, Illinois-based company.

Drivers there grew accustomed to the AOBRD automatically kicking them onto the drive line when they hit 20 mph. The only times they had to change their duty status was to go off duty or to enter the sleeper berth, Stickling says.

The ELD specification mandated automatic recording of drive time at speeds above 5 mph. Overdrive/CCJ survey respondents named this the No. 1 reason they were waiting to make the ELD transition. A third of respondents selected it among possible reasons for holding out.

Trucker Binda Atwal of Atwater, California, is among the many who point to the ability to customize the threshold as a chief reason his fleet went with an AOBRD. The three-truck fleet he hauls for runs an Ariontech previous-generation device after trying out an ELD. “It gives us a threshold of 15” mph, he says, attractive for incidental needed movements without eating up drive time or interrupting an off-duty period.

With the 5-mph threshold of the ELD specification, it will be incumbent on drivers to use new driving categories created by the ELD rule and that ELD suppliers were required to enable.

Yard moves functionality was specified as a way for carriers to move vehicles around company terminals or within facilities (generally, Federal Motor Carrier Safety Administration officials have noted, away from public roads) without automatically triggering an on-duty driving status. Yard-moves mode for drivers will be enabled as an option from the administrator account and then selected by the driver when making a yard move — the default status for a yard move is Line 4, on duty/not driving.

Personal conveyance uses of the truck while off duty also are enabled as an option from the administrator account for drivers. The personal conveyance mode then can be selected by the driver using the truck for personal reasons during off-duty periods. Once selected, the default duty status is off duty for the ELD for as long as it’s selected, including when in motion. GPS refinement is widened from a one-mile radius to 10 miles during PC moves.

FMCSA guidance has allowed the use of personal conveyance to get to the nearest parking place in two newly specified situations of note:

Overall, “drivers are hitting buttons more frequently” with an ELD, Stickling says, and “that requires training.” –Aaron Huff contributed to this report.

Next in this series: The AOBRD-to-ELD shift: Data/edits and visibility at roadside 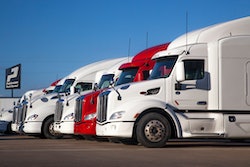 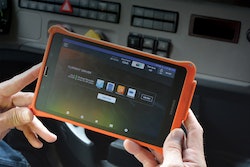