A new shortage is impacting the freight market, and it has nothing to do with drivers 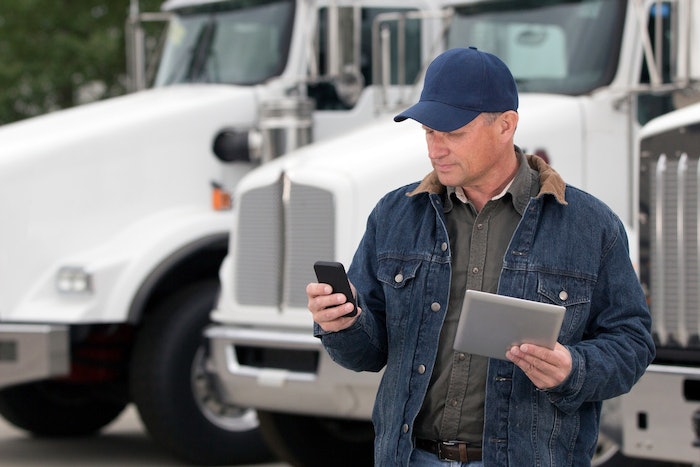 A panel of trucking industry experts came up with a new way of looking at the trucking industry's number one problem that just might turn the conventional wisdom about a "driver shortage" on its head. This, in addition to a look at the U.S. economy's response to the pandemic pushing the trucking industry to historically high rates and tight capacity comprised FTR Transportation Intelligence's webinar on Thursday last week.

"In a nutshell, the economy is doing well," said FTR Vice President of Trucking Avery Vise. "We've seen a strong rebound from the contraction early in the pandemic, but neither industrial production or manufacturing output is where they were before."

Overall, FTR's panel of experts predicted rates would slightly drop off all-time peaks but stay high through 2022, trucking capacity will remain an issue, and a meteoric rise in small new trucking companies may be muddying the waters around the industry's much feared labor shortage.

Here's what the experts talked about, and what fleet owners and drivers alike need to know about the current state of the economy.

Is there a truck driver shortage or not? 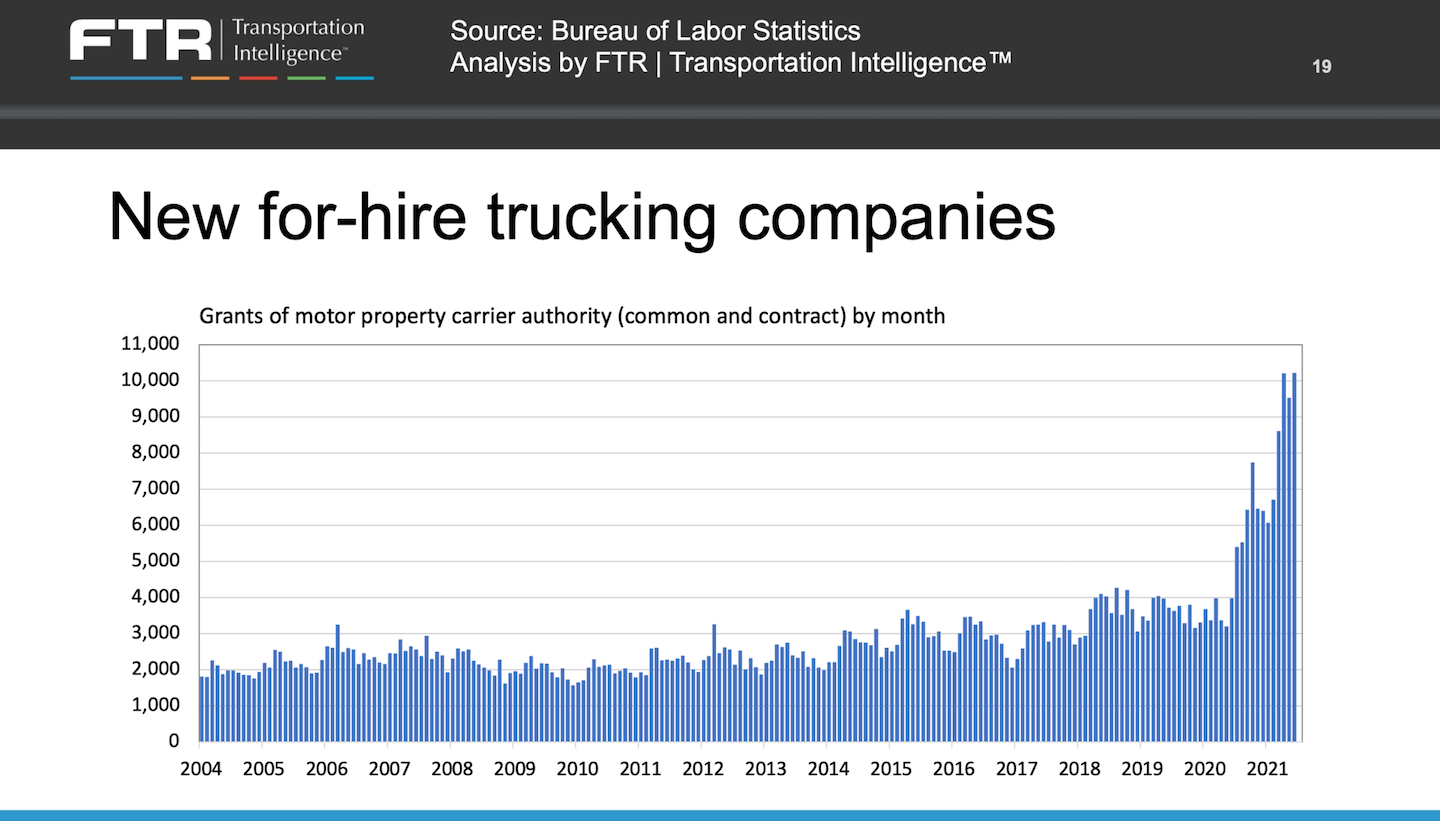 FTR's panel looked at recent data from the Bureau of Labor Statistics (BLS) to see there are about 38,300 fewer drivers employed in June 2020 than at the beginning of the pandemic. This number often gets cited to support the idea that the industry suffers from a driver shortage, but the number bears closer examination.

By definition, the BLS's payroll data only looks at drivers employed by a company. For equipment owner-operators who work for themselves, that number becomes much more difficult to track. The U.S. government does not track what industries self-employed people belong to, but there's good reason to believe that the number of drivers on payroll has shrunk while many of those same drivers made their way toward self-employment, leaving the total pool of drivers untouched but projecting the appearance of a driver shortage.

The "unprecedented surge in new and mostly very small trucking companies probably affects how we look at the employment figure," said Don Ake, the Vice President of FTR's Commercial Vehicles division. "Most of these new carriers are very small, so if even a tiny portion of those former employee drivers became owner-operators, that could offset the picture we're seeing."

According to Ake, the huge uptick in new companies is a "new phenomenon" that upsets the way industry analysts "usually depend on payroll employment" as reported by BLS. As many as 157,000 drivers may have moved from payroll positions to opening up a new business, he said.

That said, the trucking industry still faces a tremendous uphill battle in attracting and retaining talent thanks to an unprecedented mix of circumstances following the pandemic. 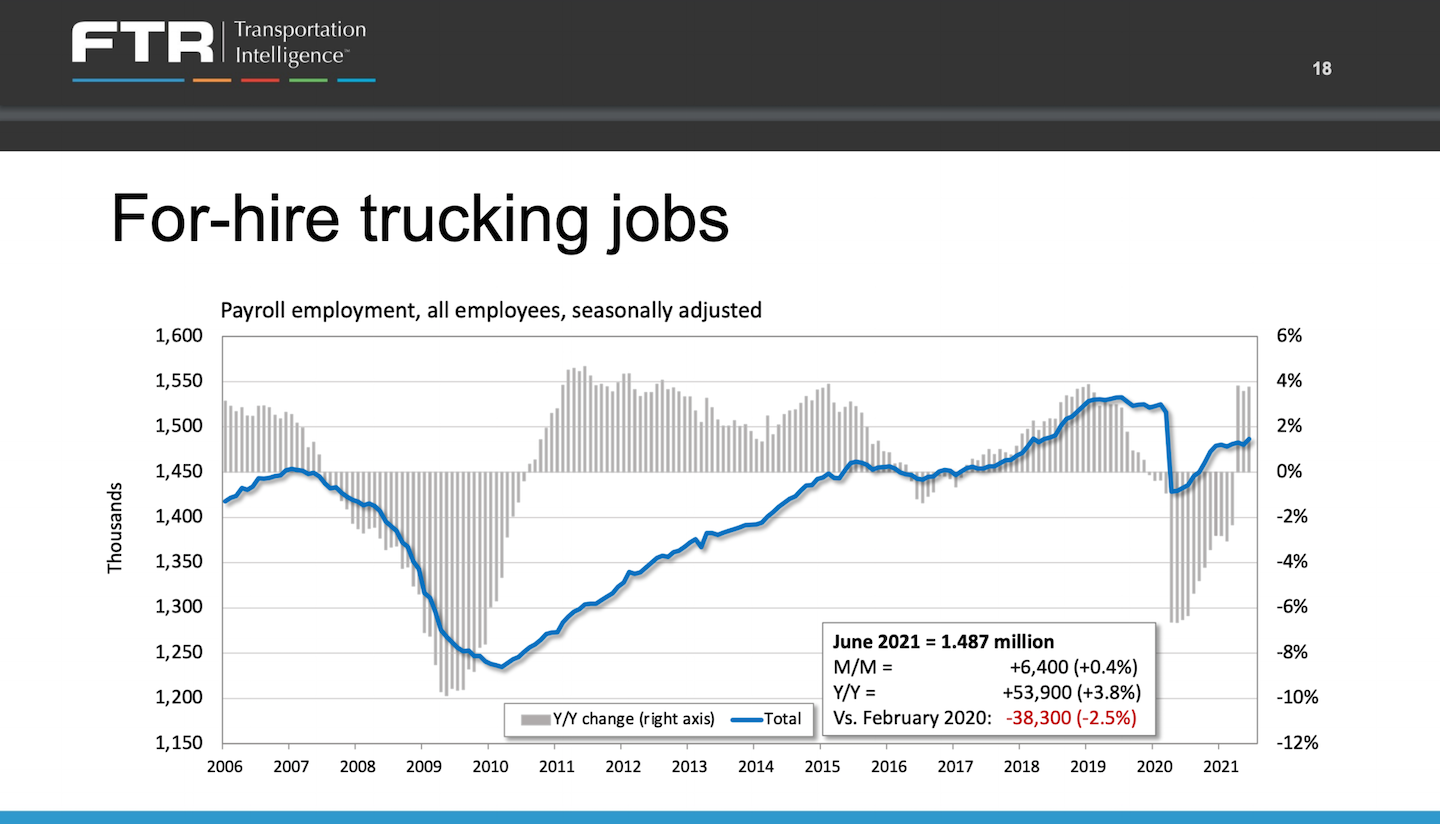 According to the panel, the industry can expect CDL training to return to normal as the pandemic continues to ease, and unemployment benefits will expire nationally in September. But recruiting is still a challenge.

"The unemployment compensation represents a real issue," said Ake. "We did an analysis and looked at the median wage of a truck driver compared to maximum unemployment benefits and the difference was less than $5,000 a year in 22 states. That's not a big delta when you consider that one is doing nothing and one is doing a difficult job."

But according to Ake, states that have done away with the expanded benefits have seen more drivers returning to work. CDL holders know they can easily reenter the workforce, so they may simply be taking advantage of the free money. 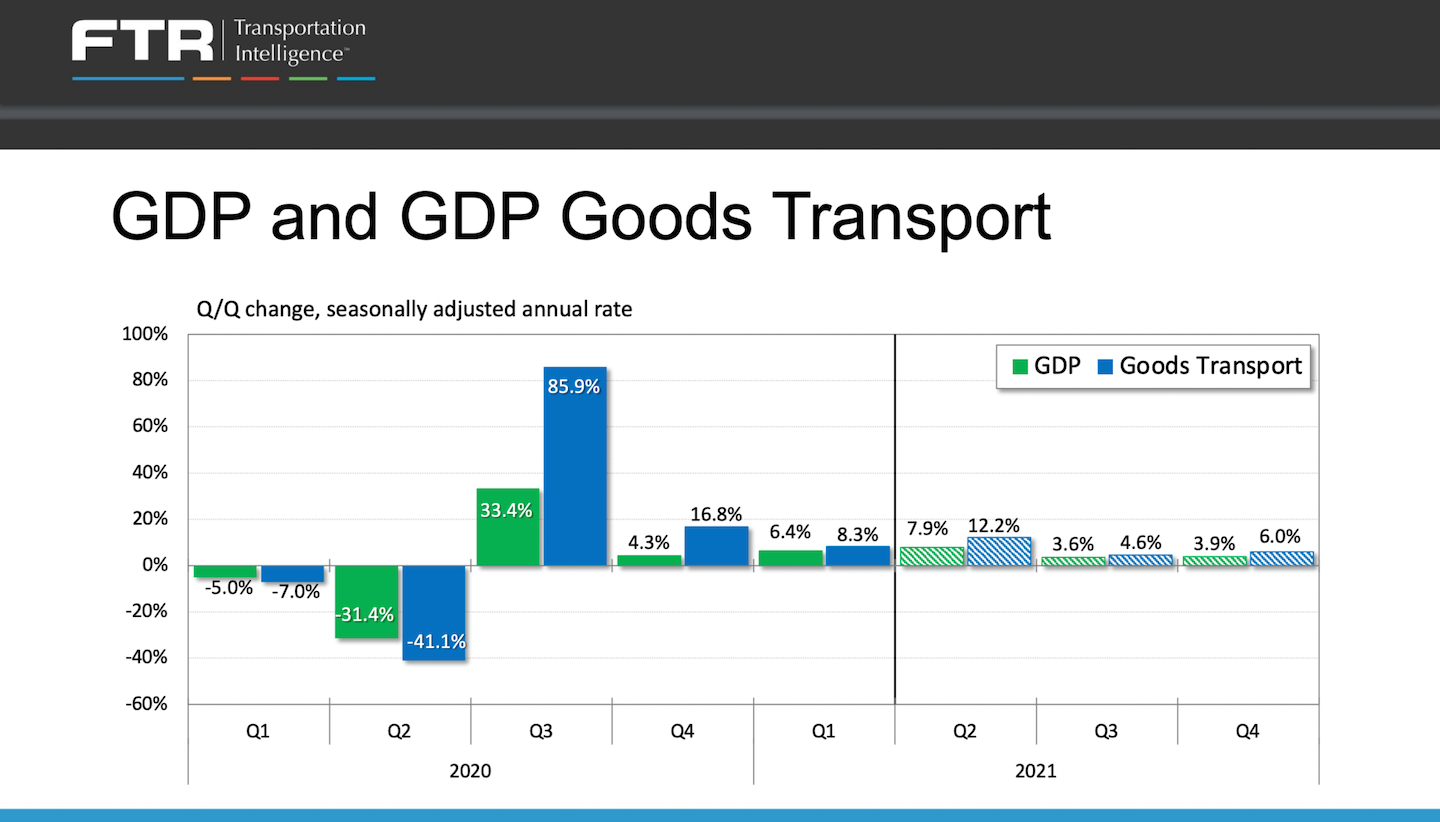 Basically, the broadest measure of the U.S. economy's output, GDP, has come roaring back to life since Q3 of 2020, and the explosion in goods transported, which includes imports not included in GDP, has dwarfed even those massive growth figures.

As the U.S. government pumped nearly $5 trillion into the economy, mostly on the consumer side via stimulus payments and enhanced unemployment insurance benefits, Americans found themselves cash-rich with few options for travel and entertainment due to COVID-19 restrictions. This resulted in an explosion of e-commerce and, with that, an extremely high demand for goods movement.

But during that same period, the pandemic hamstrung global supply chains creating a "huge stall in industrial production," according to Vise.

Industrial production in the U.S. swung wildly in 2020, with a 42% crash in Q2 and a 45% rebound in Q3, but in 2021, the Q1 uptick came in at a weaker-than-expected 3.6%. FTR expects Q2 of 2021 to show a more respectable 6.5% bounce, but the supply chain disruptions that suppressed production in previous quarters show no signs of abating.

Relatedly, the panel expected rates to stay near all-time highs as capacity and labor remained tight and a semiconductor shortage threatened new builds.

Surprisingly, the real shortage impacting the trucking industry may not have to do with drivers, but instead with high tech semiconductors used in building trucks and automobiles. For months now, the pandemic-induced shortage of semiconductors has hamstrung production of automobiles and trucks while other commodity prices – namely lumber, steel, and rubber – have combined to drive up prices for tractors and trailers alike.

"Looking at the supply chain, basically as far as Class 8 goes, the number one problem is the shortage of computer chips," said Ake. "The good news is there’s been reports that the semiconductors will start flowing into auto manufacturers in August, but some reports from financial groups out there that claim the shortage is getting worse."

Ake couldn't confidently predict when the semiconductor market will get back to normal, but he pointed out that it takes 15 to 35 semiconductors to build a truck. 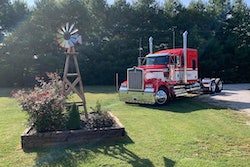 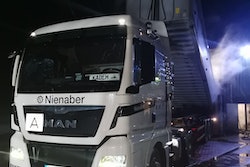