When Federal Motor Carrier Safety Administration Office of Enforcement Director Joe DeLorenzo made note in a presentation at the Great American Trucking Show this year that the agency viewed an off-duty deadhead back to the house after a load out from the same location an invalid use of personal conveyance, several owner-operators in the audience seemed surprised. The FMCSA’s allowance for personal conveyance use in an off-duty driving status has in fact been used by some in such a manner in past, they reported, though most suggested such was limited to short distances at the end of multiple irregular-route runs at a location near where the operator lives.

Such a situation well illustrates a gray area in what DeLorenzo said was an area of regs guidance described by what is essentially “a term of art.” You won’t find “personal conveyance” in the regulations, and guidance around it in past was exceedingly limited. But since FMCSA began acting on drivers’ concerns about operational hours-regs flexibility in the run-up to and since the December 2017 enforcement date of the electronic logging device mandate, available PC guidance from the agency has gotten more voluminous, for certain.

In addition to specifying allowed use of PC while under a load and detailing other uses that give drivers some clarity in sticky on-highway situations (finding parking after running out of hours at a shipper/receiver, told to move during a rest period by law enforcement officer), a brand-new set of frequently asked questions and their answers has been posted by the agency. There’s even more interepretive language now available.

In the new FAQ series, for that matter, Question No. 1 solidifies DeLorenzo’s proffered interpretation of any dispatch as encompassing a round trip:

May a driver, who drops his or her last load at a receiver’s facility, use personal conveyance to return to their normal work location (i.e. home or terminal)?
No. Returning home or to the terminal from a dispatched trip is a continuation of the trip, and therefore cannot be considered personal conveyance.

Compliance consultant Jeff Davis of Fleet Safety Services has seen enforcement of personal conveyance use in play during audits in recent times. In a presentation to and discussion with attendees of the National Association of Small Trucking Companies annual conference in Nashville, Tenn., last week, Davis noted the round-trip interpretation of a dispatch above, and detailed just how the enforcement community codifies violations featuring improper PC use.

“DOT has decided every truck that is dispatched is dispatched round-trip,” he said. “You can’t use personal conveyance coming back. They’re telling auditors this.”

He referenced an early-September audit he helped a small-fleet client through. “I sat there with the auditor as we ran their e-logs through eRODS,” the relatively new software tool in auditors’ arsenal for spotting potential violations, he said. “The carrier got rung up on dozens of counts of improper use of personal conveyance, and they counted misuse of personal conveyance as ‘false logs’,” or violations of 49 Code of Federal Regulations 395.8(e). “This auditor was done in 44 minutes – and the carrier got a Conditional safety rating.”

Davis noted a seeming contradiction in the FMCSA’s own new guidance around PC, too. The agency lists as an appropriate use the “authorized use of a Commercial Motor Vehicle to travel home after working at an off-site location,” he said. Might not that cover this situation?: “Say I pick up a load in Nashville, deliver in Tallahassee Friday,” he added. “I can’t get a load back, so the motor carrier puts me off-duty and I personal-convey back.”

FMCSA also attempted to clarify the seeming contradiction in its new FAQ in Question No. 2, limiting “offsite location” to construction- and utility-truck operations:

The guidance allows for “authorized use of a CMV to travel home after working at an offsite location.”  What is meant by the term “offsite” when used in this context?
The term refers to a location, other than a carrier’s terminal or a shipper’s or receiver’s facility, where a driver works for a temporary period for a particular job. Specifically, this term is intended for construction and utility companies that set up base camps near a major job and operate from there for days or weeks at a time. These remote locations are considered “offsite” locations. Therefore, travel between home and that offsite location is considered commuting time, and qualifies as personal conveyance.

In the GATS session in August, DeLorenzo emphasized bedrock considerations around personal conveyance. “The most important thing about PC is understanding what it is,” he said, generally. “It’s really pretty simple – it’s an off-duty status.” Owner-ops and drivers “have to be relieved of responsibility from the motor carrier” for performing business-related work. “You can’t be advancing the load or performing motor carrier work. The movement can only be used for something personal.”

Read more about the personal conveyance guidance updated in May via futher reporting in Overdrive: 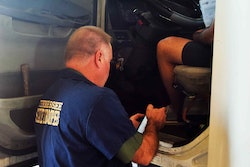 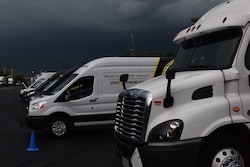