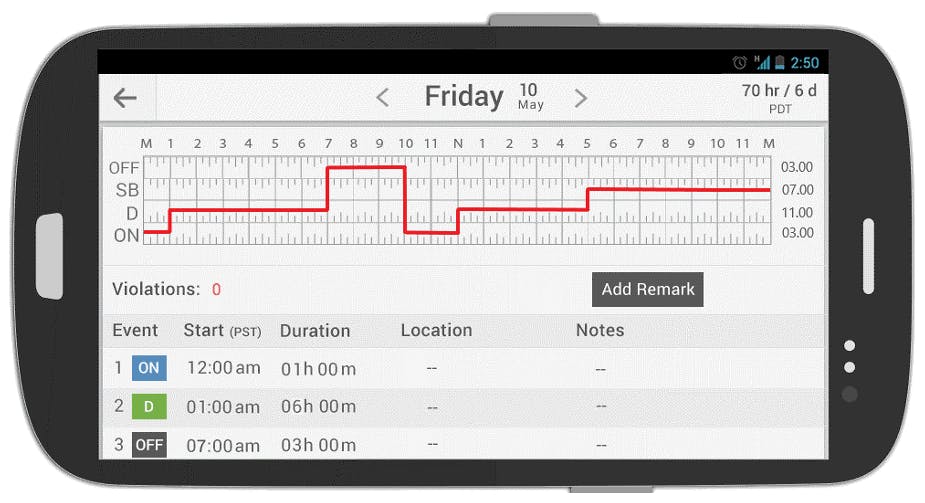 In this basic log example, FMCSA’s Joe DeLorenzo detailed the split-sleeper-berth options offered by the coming hours of service regs. Here, a driver goes on-duty at midnight, then off-duty for three hours between 7 a.m. and 10 a.m., then back on for-duty for seven more hours, until 5 p.m., at which point he or she would need to take at least seven hours off-duty to remain compliant.

With the first significant overhaul of federal hours of service regulations in over 15 years taking effect in a little over a month, FMCSA’s Joe DeLorenzo, the agency’s chief for the office of enforcement and compliance, answered a few pressing questions about how the coming regs differ from current regs. DeLorenzo spoke Wednesday in a live webinar as part of Overdrive‘s GATS Week series of virtual events.

Most significantly, the new rule, which takes effect Sept. 29 at 12:01 a.m. ET, allows drivers to split their daily required 10-hour off-duty time into segments longer than the current 8- and 2-hour split. And effectively, given a rule change that allows the shorter period to be excluded from calculation of the 14-hour on-duty limit, those splits allow drivers to pause their 14-hour on-duty clock while taking a qualifying break of at least two hours in the middle of their shift. The rule also adds flexibility options around the use of the required 30-minute break, an expansion of the use of the adverse driving conditions exception and an expansion of the short-haul exception to the requirement to keep records of duty status (logbooks).

For drivers opting to split any duty day, they must take one split of at least 7 hours and one split of at least 2 hours, so long as both breaks total at least 10 hours. “Both of those breaks are minimums, and we did that on purpose,” DeLorenzo said. “The last thing we wanted to do was to disincentivize rest.” Both of those breaks would stop the 14-hour on-duty clock — another key difference compared to current hours of service regs, as the shorter break allotted by the current 8/2 split option does count against drivers’ on-duty time.

That will change Sept. 29 when the new regs take effect.

Breaks under the new HOS rule can obviously run longer than the 8/2 and 7/3 splits that add up to 10 hours. And if the longer of the two breaks in any split goes a full 10 hours, then drivers can reset their 14-hour and 11-hour clocks entirely.

Wednesday’s hours of service webinar was sponsored by Pedigree Technologies and its OneView suite of services, which includes an electronic logging device app.

Thus, to maximize their schedules, DeLorenzo suggests that drivers plan and learn how to use the splits afforded by the new rule. “Understand how to do that split so you can work your day,” he said.

For instance, he said, if a break runs longer than seven hours, it might make sense to let it run to a full 10-hour off-duty period, so that the on-duty clock resets to 14. Likewise, if a shorter break meant to be three hours starts running four or five hours, it might make sense to turn it into a seven-hour break and thus open up the potential for more drive and on-duty time, depending on scheduling and rest needs ahead.

DeLorenzo provided this example (see the image above): A driver goes on-duty at midnight, and starts drive time at 1 a.m. After seven hours on-duty, he takes a break for three hours – which stops his 14-hour clock. He then goes back on-duty at 10 a.m., resumes driving at noon and drives until 5 p.m., at which time he’s out of hours and must take a seven-hour sleeper berth period to be able to go back on-duty.

The shorter split option could be longer — four, five or even six hours. But it must be paired with another break later of at least seven hours for drivers to remain compliant. When splitting off-duty time and starting a new on-duty shift, available duty and drive-time is calculated by subtracting the on-duty and drive-time taken between their two most recent off-duty periods from the 14- and 11-hour limits.

Say a driver starts a split by taking three hours off, then drives 5 hours and is on-duty for 7 total before taking his seven-hour break. When he comes back on-duty, he would have just 6 available drive hours, and 7 on-duty hours before he’d need to take another break of at least two hours.

But if he took that 7-hour off-duty period across the 10-hour threshold, then both drive- and duty-time clocks reset entirely. Drivers do not, contrary to some road rumors, retroactively lose the pause value of the shorter break if they extend their longer split all the way out to 10 hours.

Of note, on and after the Sept. 29 effective date, drivers don’t have to make any changes to their duty days if they choose not to. That’s simply the date the new options will become available. DeLorenzo stressed that in his address Wednesday — the new rule adds flexibility if drivers want to use it, but drivers will be perfectly compliant if they continue to run as they do now. “The old rule is wrapped up into this new one. It gives you new flexibilities. You can still take 10 hours off and that’s fine. You can still manage your 30 minute break to take it sooner. In all cases the current rule still works,” he said.

Among other key changes of the looming hours of service rule, DeLorenzo explained the finer points of new regs surrounding the 30-minute break. Drivers since 2013 have had to take a 30-minute break — on the off-duty line — after their first eight hours on-duty. Starting Sept. 29, that break will now be required after drivers’ first eight hours of drive time, and it can be taken in any duty mode that’s not driving.

DeLorenzo provided a common example: A driver stops, fuels up (on-duty not driving, 15 min.), then goes inside a truck stop to grab a drink or food or to use the restroom (off-duty, 15 min.). Under current regs, the time spent fueling can not be used toward the 30-minute break, because it’s on-duty not driving time. “Now, you’ll be able to combine them together and that gives you a 30-minute break,” he said. The break must still be taken as a straight 30 minutes. Multiple, shorter stops will not satisfy the requirement.

Often, drivers may not have to use the break at all, though, such as when you don’t reach eight hours of drive time in a duty cycle or when you’re using the split-sleeper options. Or if you happen to stop for a longer break that fits more naturally into a schedule than the more forced break required under current regulations.

Also available to drivers under new regs is an expanded adverse driving conditions exception. Instead of simply giving drivers two more hours of drive time if they encounter adverse conditions such as weather, road closures or a crash that causes traffic to back up, drivers will have an extra two hours of on-duty time available, too. DeLorenzo stressed that the adverse conditions must be “things that were not known or could not have been reasonably known at the time of their last qualifying rest break.”

So encountering rush hour traffic in D.C. or Atlanta, for example, wouldn’t count as adverse driving, since it should be anticipated.

“If you do due diligence as a driver, you check conditions and off you go and everything is good, if something goes wrong you can use this exception,” he said. Likewise, the new rule puts the control in drivers’ hands as to decide whether to use the exception — not on dispatchers or others.

If drivers do use the adverse conditions exception, they would be wise to add an annotation to their ELD or paper logs explaining that, he said. “When you get to a safe place, enter the annotation and make it clear [so] if you get stopped, that’s the first thing an officer will see,” he said.

Lastly, DeLorenzo on Wednesday discussed the coming changes to the short-haul exemption, which allows drivers that operate in short-haul operations to skip keeping records of duty status (logbooks). Currently, that’s limited to drivers who operate within a 100-air-mile radius of their home base, and the exception only allows drivers 12 hours of on-duty time daily.

Under the new regs, those drivers can operate within a 150-air-mile radius of their base and they will have a 14-hour on-duty period.

Preparing for the new hours of service rule 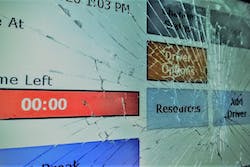 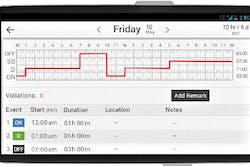 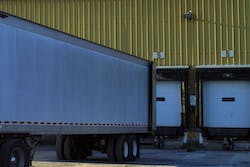