Southern Calif. crash between truck, SUV leaves at least 13 dead
A two-vehicle collision early Tuesday morning involving a truck and an SUV in southern California about 10 miles north of the U.S.-Mexico border left 13 people dead and another 13 injured, according to local reports.

NBC San Diego reports that around 6:15 a.m. Tuesday, a Ford Expedition occupied by 25 individuals crossed the path of a truck pulling two empty belly-dump aggregate trailers on State Route 115 at Norrish Road. Twelve people inside the SUV were reportedly declared dead at the scene of the crash, and another later died at an area hospital. The remaining 12 people inside the SUV were transported to hospitals to be treated for injuries. The truck driver, identified by California Highway Patrol as Joe Beltran, 68, of El Centro, California, was also injured and transported to a local hospital, the report notes.

California Highway Patrol Chief Omar Watson said in a press conference the cause of the collision is currently unknown and that it’s unclear whether the SUV ran a stop sign or stopped and didn’t see the truck coming.

According to the CHP accident report, “for reasons still under investigation,” the Expedition “entered the intersection directly in front of” the truck, causing the truck to hit the left side of the SUV. The accident report also noted that it’s still unknown if alcohol or drugs were a factor in the crash.

Watson added that the weather was clear and dry and that there were “no indications that weather had anything to do with the collision. We have so many distractors in our lives when driving, and it’s too early to speculate what may have caused them to not see each other.”

Watson also said there were only two seats in the SUV – the driver’s seat and the front passenger seat, indicated that most people in the vehicle were not properly restrained.

The National Transportation Safety Board said Tuesday it will investigate the incident. 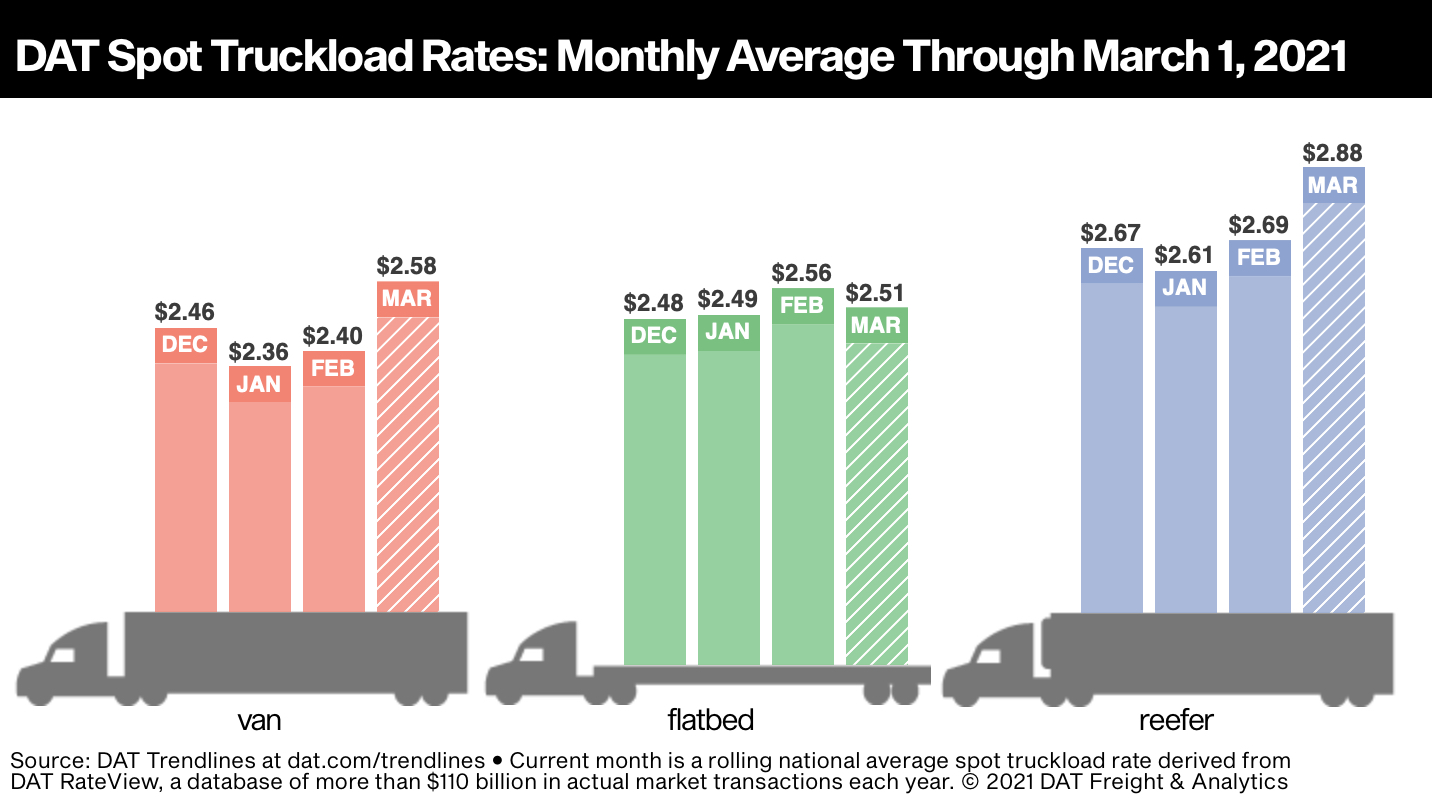 Spot rates in the last week | Amid "record freight volumes" for this time of year, according to load board operator DAT Freight & Analytics, national average spot truckload van and refrigerated rates swung back up to early January levels during the week ending Feb. 28. The number of load posts on the DAT network was 24% higher and truck posts increased 11% compared to the previous week. Intermodal network disruptions pushed more freight into the spot markets as shippers sought to meet delivery deadlines with customers. Van and reefer pricing entered March much higher than these February averages. On March 1, the national average van rate was 18 cents higher at $2.58 per mile; the reefer rate was up 19 cents at $2.88. Compared to the same period in 2020, reefer load-post volume was up 306% last week. Demand for temperature-controlled equipment is exceptional for this time of year, as we enter a period where year-over-year comparisons will be skewed by the start of shutdowns in the U.S. due to the pandemic.

The new location, off of I-86, also offers a Wendy's restaurant, seven diesel bays, seven showers, a Love's Truck Care and more.

The store is the company's third location in New York.