A week before Overdrive founder Mike Parkhurst died on July 21, he emailed me with the subject line “not dead.” We’d been discussing the Overdrive Roadmansion, a Los Angeles home he converted in 1967 into trucker lodging with live entertainment and white-tablecloth dining.

The project was one of many bold, sometimes eccentric moves from the same man who produced movies, called for nationwide shutdowns and once rode a horse hundreds of miles to protest outdated laws. This was also a man whose activities after selling Overdrive in 1986 (producing the DVD “Trucker Wars,” the ebook “Semi-Justice – Digging OPEC’s Grave,” and most recently, a project to promote highway safety) confirmed that he was clearly “not dead.”

The first few decades of Overdrive reflected his persona. Those old issues contain outrageous cartoons and headlines, homespun writing, lots of pretty girls with shiny trucks, and criticism of the Teamsters leadership, truck makers, troopers and others.

Those were different times for trucking. Intense federal regulation, combined with the Teamsters’ stranglehold on regulated freight, made things ridiculously difficult for owner-operators who wanted to move outside of exempt commodities. The time was ripe for a “Voice of the American Trucker,” and Parkhurst created Overdrive to fill that void.

Today’s owner-operators have him and other leaders, as well as thousands of drivers who followed them, to thank for today’s ease of entry to the industry. No one should take for granted the freedom to compete with no restrictions on lanes, rates, areas of operation or freight.

After the old regulatory chokehold disappeared, a new regulatory monster took its place. This one is fueled by safety concerns and manifest in programs such as CSA, ever-changing hours regulations, and drivers’ medical certification.

As it covers those topics, Overdrive continues to be The Voice of the American Trucker. For example, Senior Editor Todd Dills’ expose of how CSA unfairly penalizes independents won trade journalism’s highest honor, the Grand Neal Award, this year. Our CSA coverage continues to bring in some of the highest reader traffic on our website.

Like the industry it covers, Overdrive has changed a lot. Parkhurst’s style was suited to that pre-1986 era, though ultimately it wasn’t suited to a self-sustaining business. The iconic change agent of his day – the shutdown – worked, at least to some degree. In recent decades, it hasn’t, as evidenced most dramatically by last year’s embarrassing Ride for the Constitution.

Overdrive has grown in different directions, but we’re still proud to continue as The Voice of the American Trucker. That spirit is “not dead” and will remain alive as long as we’re doing our jobs. 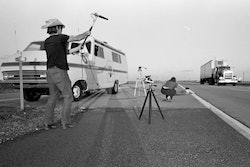 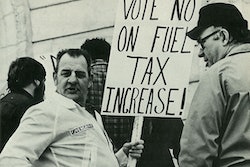