Swift Transportation’s recent announcement that it will put Lytx DriveCam dual-camera systems on its fleet of more than 6,000 company-owned trucks drew plenty of comments here on Overdrive. Swift is hardly alone in a trend that shows, once again, the contentious interplay between technology, privacy and return on investment.

As with electronic logging devices, drivers have not been eager for driver- or road-facing cameras under a fleet’s control. When it comes to in-cab cameras, you can’t blame anyone in any job for resisting an electronic eye capable of recording your entire shift. Though most in-cab camera systems are set to record only seconds before and after events such as hard braking, that’s been little comfort to many drivers.

Regardless of such concerns, the cameras are coming. One reason is that in an accident with a four-wheeler, video more often than not will exonerate the driver and his fleet. On a broader note, the hard evidence being captured of four-wheelers at their most reckless (as evidenced in Overdrive‘s Dashcam Central’s clips collection) eventually could support efforts to educate or punish careless motorists.

But the biggest payoff for fleets is that the vendors’ analysis of video helps their customers identify drivers who need coaching. Often what is addressed are just the basics, such as following too close, as Angie Buchanan of Melton Truck Lines told Senior Editor Todd Dills last year. The driver “might not realize it from a habit perspective,” she says, but once it’s pointed out, it’s fixed easily.

An Overdrive poll last summer showed that one in five readers have a camera system in their truck. What’s telling is that most of those are owner-operators who bought their own forward cameras. Like fleets, they see the advantage of legal protection. Some also see potential security value while parked.

In the case of electronic logs, many fleets willingly paid for the systems well in advance of the federal mandate, which could take effect in late 2017. Most did so not because they are such saintly practitioners of safety, but because it just made sense. It simplifies work for drivers and office staff. It reduces the potential for violations, thereby reducing expensive and time-consuming friction with regulators.

Truck cameras seem to be following the same path. Whether forward or dual-camera systems eventually will fall under a federal mandate isn’t clear, but in the meantime, common-sense factors point to their continued adoption. That includes forward dashcams bought by single-truck owner-operators who are able to see with a clear eye when technology offers more good than harm.

What’s been your experience with forward or driver-facing cameras? 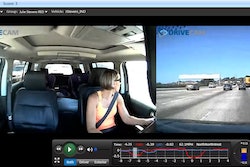