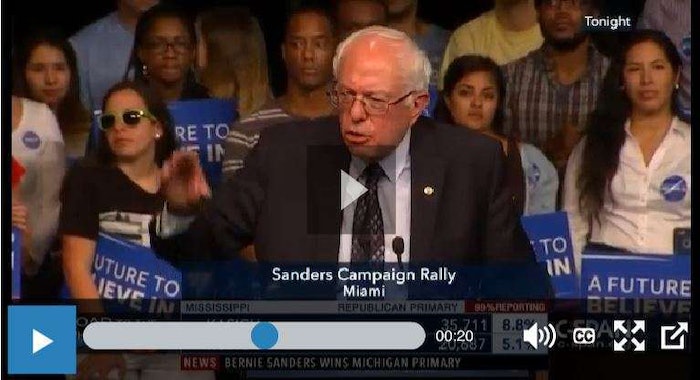 It’s unclear whether he meant all trucks or just some trucks, but speaking this weekend, presidential hopeful Sen. Bernie Sanders, running as a Democrat, told a crowd of supporters the U.S. could do “incredible things” like building a rail system to “take trucks off the roads” if he’s elected president.

The video clip that surfaced this weekend offered little context on the matter, other than he couched it in terms of energy efficiency; the line about removing trucks from U.S. roadways came just after he said the U.S. should work to make buildings more energy efficient.

Commenters ‘round the web seem to think Sanders meant he’d work to kill the trucking industry if elected. If he did mean it that way — that he’d attempt to orchestrate the expansion of the U.S. rail system in hopes of shrinking the size of the trucking industry — it’s an idea that needs taken back to the drawing board. And then shelved. If he meant it another way, it’s clearly a poor choice of words to convey whatever point he was making.

And to think Congress would take up such a measure? Lawmakers can’t even pass a basic highway funding bill. A new nationwide rail system? I think I hear my alarm ringing.

If Sanders’ campaign is marketing him as the candidate of progress, perhaps a look at the evolution of the U.S. transportation industry in the last century would help clear things up: Rail’s the system of the past, despite the billions of dollars poured into the rail industry by the federal government over decades and decades.

Despite rail’s major head start in the late 1800s and early 20th century, trucking caught up and then subsequently left rail in its tracks, as the demands of the market and the expansion of the U.S. highway system gave way to the more modern and logistically friendly trucking industry.

A move to push more freight toward rail, even a “state-of-the-art” system that Sanders calls for, sounds more like regression than progression.

However, Sanders’ odd comments on trucking aren’t the first headlines the industry’s grabbed in the circus that is the 2016 presidential election. Donald Trump, the frontrunner in the Republican primary race, said in 2006 in one of his digs at Rosie O’Donnell that she “talks like a truck driver” —  a line that was brought up last fall when Trump’s public feud with Fox News personality Megyn Kelly began:

A compliment, perhaps? Let us know what you think in the comment section below. 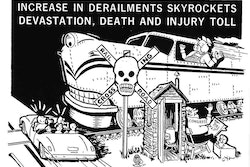 Rearview: Fighting rail in the name of safety