The Senate’s Appropriations Committee last week passed a 2017 DOT funding bill that would set an April 28, 2016, deadline for the DOT to publish its proposed rule to mandate the use of speed limiters/governors on heavy-duty trucks.

That deadline likely will be changed as the bill progresses, however, given that there’s no chance the legislation will clear Congress today and be signed into law by the president.

As noted in Overdrive’s prior coverage of the bill and its notable hours-of-service reform, the bill still has major hurdles to clear before being enacted, including passage on the Senate floor and reconciliation with the House’s version of a Transportation and House and Urban Development bill, should the two differ.

Either way, the Senate’s message is clear: Proponents of a speed limiter mandate, like some trucking lobbyists and so-called safety advocacy groups, appear tired of the DOT dragging its feet in getting the proposed rule published and have asked Congress to intervene.

For nearly two years, the DOT has issued a report each month indicating the rule is weeks away from publication. Despite those reports, the rule’s been snared by the regulatory process for some time. Granted, the rule’s slow progression is a positive for owner-operators and other truckers who oppose the rule and dread the day Uncle Sam will require use of speed limiters.

The DOT and its subagency developing the rule, the National Highway Traffic Safety Administration, may not be entirely to blame for the rule’s delay, though.

The DOT worked efficiently on the rule in 2014 before sending it to the White House’s Office of Management and Budget for final approval. The rule’s been hung up at the OMB for nearly a year now. The OMB typically is required to give its stamp of approval on such rulemakings within 90 days. A note added last summer to the rule’s listing in the OMB’s regulatory dashboard says the rule’s review has been “extended,” but offers no insight as to why or how long the review’s extension is.

Either way, the Senate’s move to set a deadline would force either the OMB’s hand or the DOT’s in hastening the rule’s publication, for better or worse. Even if the speed limiter rule were issued today, it likely wouldn’t take effect until late 2018 or even into 2019, given the process it takes for the DOT to develop a Final Rule and the compliance window that follows.

The Senate likely won’t resume work on the 2017 DOT appropriations bill until mid-May, when it returns from a week-long recess set for next week. It’s still unclear whether the House will take up the Senate’s bill as-is or produce its own. And lawmakers in both chambers are currently tied up trying to pass a major aviation bill, with a July 15 deadline looming.

Though the speed limiter deadline is of interest for the trucking industry, the far more notable trucking industry reform included in the Senate bill are the potential changes to truckers’ hours of service rules. Read more on the Senate’s proposed hours reform at this link: 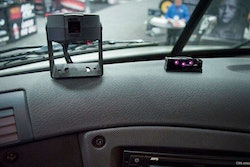