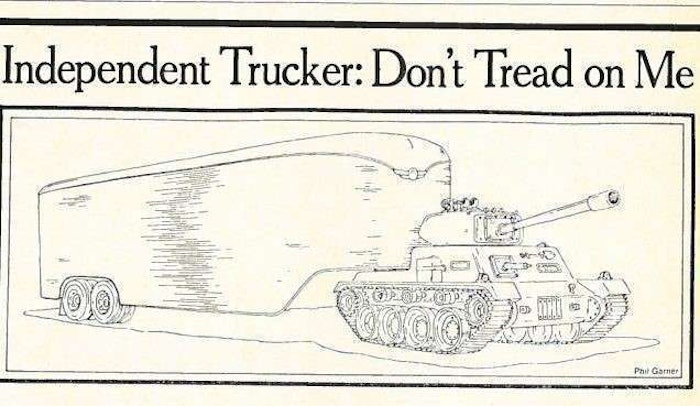 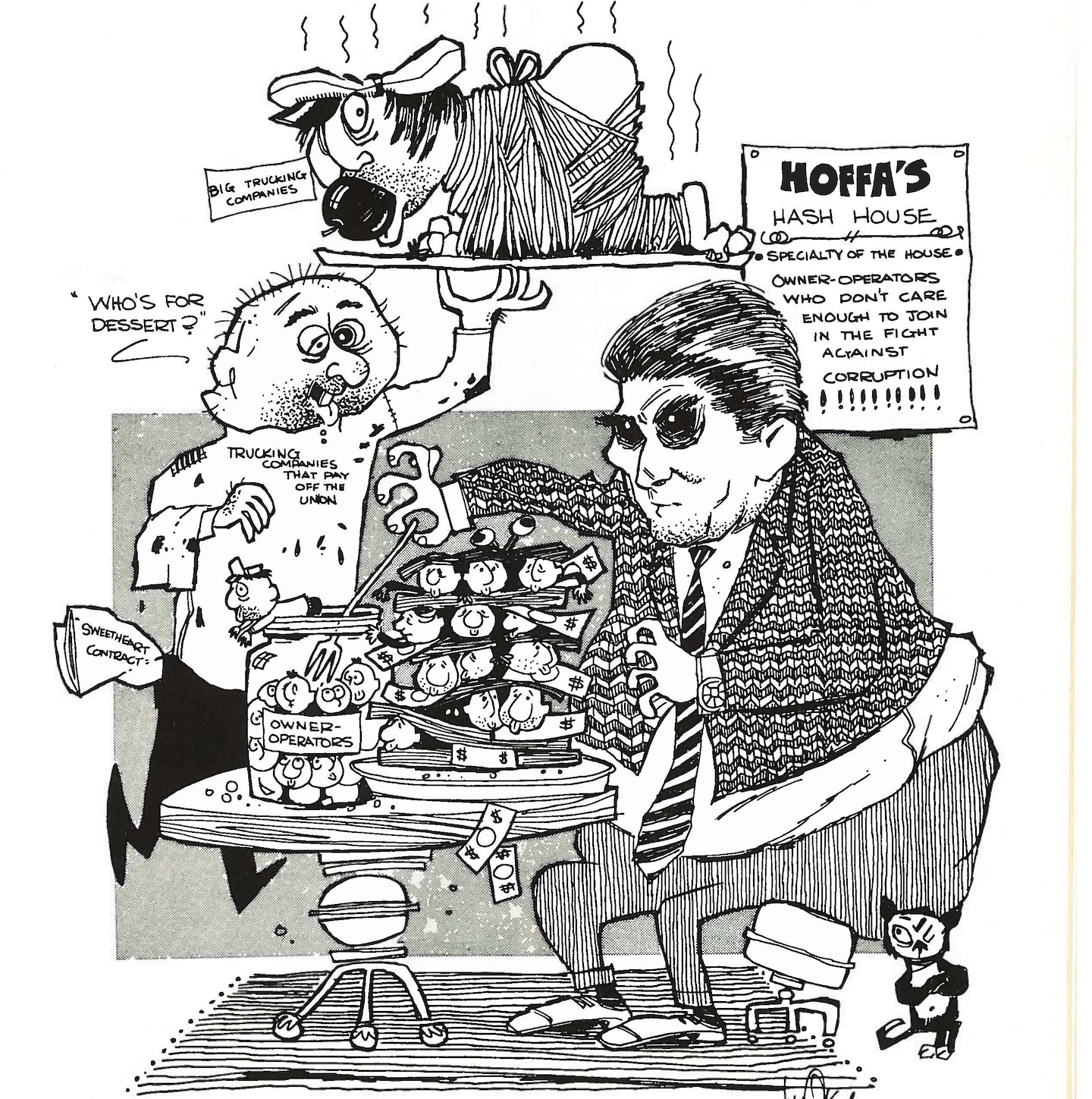 This C. Livolsi cartoon from the October 1962 issue shows Jimmy Hoffa stuffing a sandwich with owner-operators. The sign reads: “Specialty of the House: Owner-operators who don’t care enough to join in the fight against corruption!”

From the early 1960s to the early ’80s, rarely did an issue of Overdrive leave the printer without one or more articles accusing the powerful International Brotherhood of Teamsters of widespread corruption, misuse of truckers’ dues and violent bullying tactics aimed at its detractors.

Overdrive founder Mike Parkhurst painted the Teamsters’ efforts to unionize all truckers as bad for owner-operators and their quest for greater independence. 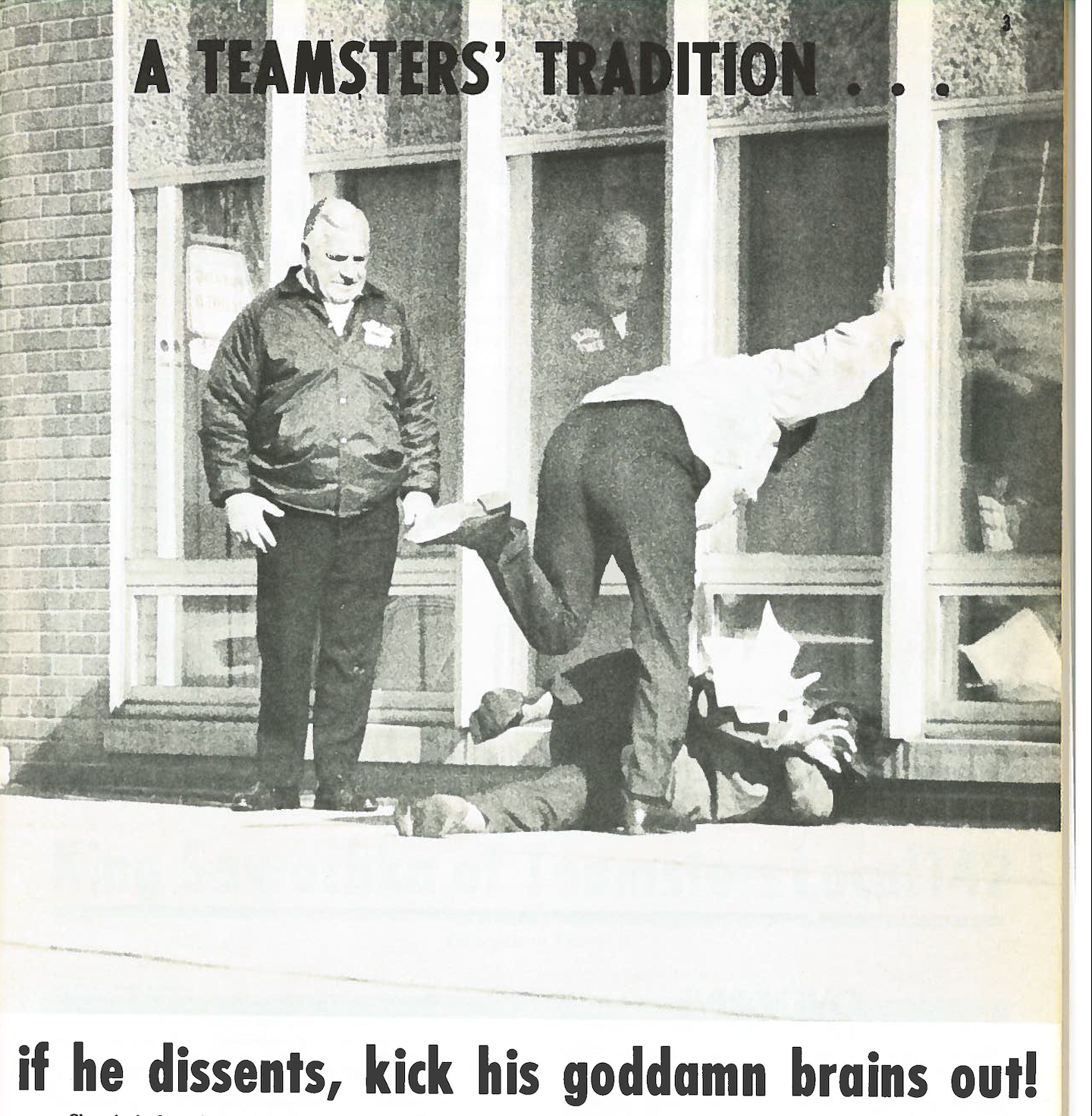 This image was shot by Detroit News photographer Joseph F. Wiedelman in the 1960s. It ran in the January 1969 Overdrive, but it also appeared in other issues alongside articles railing against the Teamsters and their strong-arm tactics. The man on the ground was Bernard Jacubus, who was handing out anti-Jimmy Hoffa literature in front of a Teamsters office.

Parkhurst’s articles and editorials portrayed Teamsters leaders as overindulgent leeches and claimed that money set aside for truckers’ pensions was used on gambling, prostitutes, organized crime, expensive golf games and sucking up to political elites. Teamsters’ officials were characterized as gluttonous and out of touch with the laborers they claimed to represent.

The disappearance of Teamsters head Jimmy Hoffa in 1975, combined with deregulation of the trucking industry in 1980, undercut the union’s power. After decades of fraud at high levels, it was hit hard by regulators with sanctions and fines. For 25 years, the Teamsters and its finances were closely monitored by the federal government, a practice that ended just two years ago.

Overdrive drew attention from the national press for fearlessly taking on the Jimmy Hoffa-led International Brotherhood of Teamsters. This drawing accompanied an article by Overdrive founder Mike Parkhurst that originally appeared in Rolling Stone. Chief among his points were owner-operators’ reluctance to join the Teamsters because of the group’s corrupt practices and anti-owner-operator agenda. Overdrive published the article in the May 1974 issue.
Get the business tips, industry insights and trending news every owner-operator needs to know in the Overdrive newsletter.
Sign Up
Read Next