In relatively recent posts I’ve  written about driver pay and about training and apprenticeship programs, and I proffered then a “modest proposal” of sorts for a graduated license separate from the state license.

There is in our industry a virus, “something that poisons.” It has spread throughout the industry and increased turnover rates, driver dissatisfaction and drivers exiting the industry in droves. A parasite, “something that resembles a biological parasite in dependence on something else for existence or support without making a useful or adequate return.”

I am speaking of lease-purchase programs and how some companies mis-use this resource, fleecing drivers who have desires and dreams to become owner-operators.

Don’t get me wrong: Some of these programs work for the operators and are run by honest, hardworking companies and owners. Those companies go out of their way to help a driver be successful, while mentoring them on how they can achieve better results. My current company is one such, and after seven attempts I finally found them. You heard me correct — seven attempts. To be fair, perhaps not all of those prior companies fit the definition of parasite (I didn’t understand business or spend much time knowing my numbers at the beginning), but I think it’s safe to say most did. Because of hard lessons learned, I was forced to set rigid rules of conduct, contravention of which would be sufficient impetus to cut my losses and run.

Rule one: Never lie to me, which could in a sense be birthed out of…

Rule two: Never steal from me. I have learned the hard way that if they lie to you, they are most likely stealing from you. I walked away from my very first truck and company because the owner, my ostensible business partner, was skimming off the top of the loads and taking a bigger cut than the agreed-upon contract stated. And he was overcharging for insurance at the same time, almost doubling the amount skimmed. I should have known better the day I first met him, when he said, “I am the most honest person you will ever meet.” If you hear those words, run. Don’t look back. If they have to say it, odds are you can bet they have been and always will be a thief and a liar.

Another program promised me the miles I needed to make the numbers work, but with constant breakdowns and short hauls it never panned out. This company was more concerned about giving miles to company drivers than lease drivers, and it was not until I gave notice that they attempted to run me the miles I needed and was promised.

I am not going to go through my whole list of mostly unwritten rules — if you want to know them, contact me and I can spell out plenty more. I will say that, after putting up with so much, it’s no wonder so many drivers burn out of the industry. One decent company I found myself leased to back in those days might be considered a victim of such driver burn-out. I made money with them. I actually built equity up in the truck. But in the end I was suffering from burn-out and no longer wanted to be on the road.

I will, however, offer you a few maxims on spotting a bad deal.

Don’t owe your soul to the company store.
If the company you’re looking at seems to make their money from you buying the truck, paying for repairs and parts in their shop, buying tires from or through them, and buying fuel where they insist you must, run and don’t look back. Tires, parts, and shop rates I’ve seen marked up to OEM prices instead of the fleet usefully passing on the discounts they get for buying in bulk. In those cases, you might as well be getting the work done at the OEM. They may claim they pass on the discounts, but don’t bet the bank on it without evidence.

Be wary of any carrier with more than a 50 percent turnover rate.
If the company you’re looking at comes in well higher than that, you can bet that there is a good reason for it. You do not want to invest your time and hard-earned money finding that reason the hard way.

Get examples of former lease-purchase with title in hand
If none or very few have actually paid off a truck and have title in hand, there is a reason why, and you should avoid that trap. Parasite companies will nickel and dime a driver to death, stringing them along until they have milked them for all they are worth.

I don’t know exactly what can be done about predatory behavior like this outside of stepped-up enforcement of truth in leasing and lending regs, but I do know that until drivers can effectively protect themselves from predatory programs, retention will continue to be an issue for carriers all around the industry.

These types of programs send drivers running from the industry convinced it is full of liars and thieves. 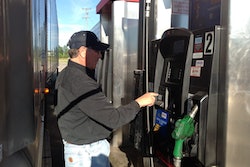