A 23-year-old web designer and a 51-year-old singing trucker have pooled their resources to acquire and relaunch Chrome and Steel Radio (ChromeandSteelRadio.com), a web-based entertainment venue dedicated to the transportation industry.

David Coleman, Purdue University graduate with dual degrees in Physics and Clinical Pyschology, sees the trucking industry as “about ten years behind the auto industry” in terms of “digital media, video content, customer interfacing and transparency.” His background  includes web design, digital marketing, a history of building internet companies from scratch, and an Indiana farm boy’s love of big trucks. The Lafayette native, who grew up on a 380-acre grain operation, is the owner-operator and founder of three digitally based enterprises — Kain Media Group, CollegeInvestr , and Jack’s Chrome Shop. He sees a “need for better digital content” within the trucking industry, which a multimedia platform that includes Chrome and Steel Radio could complement nicely.

In tandem with tank hauler/recording artist Bill Weaver, whom regular Overdrive readers will recognize, Coleman hopes to “bring entertainment back to trucking radio.”

While demurring at an outright denunciation of the veritable monoculture of all-talk trucking radio, Weaver, an owner-operator leased to Heniff Transportion, did roundly debunk the notion that it’s just too expensive to pay musical royalties, as has been the contention among radio hosts and programming directors (with the notable exception of America’s Trucking Sweetheart, WSM’s Marcia Campbell) beginning around 2002. “If royalties were as expensive as people make them out to be, all these little radio stations throughout Texas, Oklahoma and Arkansas would already be out of business. Mechanical royalties are just an operating expense, and one we have no problem paying.”

Weaver, who cites his childhood idol in Texas songwriter/D.J. Bill Mack, hopes to structure the network’s approach around the friendly, interactive, entertainment-first format “The Midnight Cowboy” pioneered, while capitalizing on the burgeoning resurgence of singing truckers whose works have found fresh currency in the digital age. Voices of names such as Tony Justice, Jason Lee Wilson, Mandi Jo Pinheiro, Keith Sampson, David Paul Knowlin and Brad James can be expected to be heard, as well as classic artists like Merle Haggard and Red Sovine.

Their plan is as bold as it is intriguing — to convert a small percentage of the cumulative monthly reach of all the contributors to  Chrome and Steel (according to Coleman, that reach looms at a verifiable “2.4 million, with an M”) into engagement. If you’re a technological Neanderthal who still uses a flip phone like me, here is what all that means: reach represents the amount of times one’s content enters the screen of potential viewers: engagement represents how many times that content is actually viewed; conversion is the rate at which reach can be converted into views, or, in this case, listens.

For starters, Weaver sees the conversion rate in the low single digits. “Even at one percent, that’s 24,000 listeners,” he explained. The network’s  programs will include “The Jack and Dave Show,” “The Out on the Road Show” with Weaver,  trucker-advocate Tom Kyrk’s “Road Tested Living Show,” owner-operator Robert Greene’s “Old School Meets New School,” as well as Wisconsin-based fitness teacher and coach Hope M. Zvara’s, “A Daily Dose of Hope,” which will encompass a half-hour driver wellness and life coaching format.

The network, whose soft relaunch was scheduled for mid-December, was purchased from Quebec-based businessman Bruce Lacasse early last year by Weaver and Coleman. According to Coleman, Chrome and Steel had an average of 100,000 monthly listeners at the time of its sale. 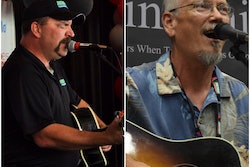 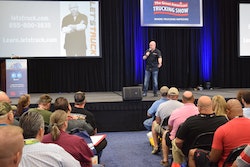