I ran into Chicago-based owner-operator Carlos Alizondo last spring at the Mid America Trucking Show. Alizondo’s trucked for more than 30 years, and in that span, he's just about done it all. He's hauled in Iraq, providing logistical support to Uncle Sam during the second Iraq War, and he's pulled flatbeds and reefers throughout the lower 48.

And yet you may be taken aback by the well-traveled gentleman's answer to the question of just where to find the best food in his city of big shoulders: "Home."

Despite having plied his craft halfway around the world, in a very real sense his trucking career has come full circle.

"I've decided that containers are the way to go right now;" he said, "because I make the same money I did running over the road, and I'm home often. I love pulling these containers out of Chicago. I run Harvey, Bensenville, Schiller Park, Elwood, Illinois. They've expanded those container ports a lot.".

A veteran of the United States Marine Corps, Alizondo maintains that the container scene out of Chicago has improved dramatically since the 1980s.

"When my dad started, the rates were absolutely terrible,” he said. “Back then we had junk trucks. We were running Whites and old White Freightliners. Everything was paid for. They only bought [them] for two or three thousand dollars. They were running recaps, barely keeping them running, making say, two, three, four, five hundred a day!"

Having cut my own trucking teeth pulling containers and piggybacks out of Chicago, pulling down a whopping 21 cents a mile, I can remember those days quite well. With Alizondo I had one of those great conversations you seem to only find at truck shows anymore. We had run the same yards, started at around the same time, and spoke the same language. I was glad to hear, at least for the old Marine, that despite recent downturns in many container markets, things still weren’t the way they were back then.

"I'm leased on to Universal out of Harvey, Illinois,” he said. “They bought out Michael's Cartage [in 2019]. I'd been with Michael's for ten years when they bought us out."

Having been through a buyout myself, I couldn't help but relate my own war story of how that all played out. Where I worked, very few of the original drivers weathered the transition, and that all seemed to be by design.

"Yeah, you know I thought it would be that way over here myself,” Alizondo said. “But they turned out to be very nice. We have parking, we have fueling, we have maintenance, we have our own chassis... Plus they're even paying layovers. The fuel surcharge is pretty good. I have no complaints with it.”

That day last spring he was hooked to a load going to Iowa. "Great run," he said. “I got to spend the night in Waterloo, because of the e-log. But they pay very well. Enough for two days. I could do two of those a week and be happy. It's an easy gig. You can't go wrong... These guys don't know how good they have it today. Do you remember the days of just getting the name of a company and the town, and going there and stopping at a gas station and getting the actual address? Or [you'd] go to a fire department and ask 'em, ‘Hey, where is this place?' And they'd show you how to get there.

"Back when I first started, they'd give you a container number, the rail yard, and you'd go out and find it. I was like, 'Who could work like this?' Now they actually give you a location. It's all paved and concreted. My God, I was going through a war zone to get those containers! To get a tire fixed or some lights, if you found a mobile unit that was supposed to assist you, they'd run away from you! It was like hide and go seek. And then you're chasing ’em to get some tires fixed or some lights. Oh my God, they're huffing and puffing. Hey, man, it's your job!

“I remember going down to Danville, Illinois, with the [wheel] bearings going out. And it's like, ‘Oh my God! And it took days to get that fixed....

"I call it the infantry. We were the infantry. That's what that was. Now they actually give you a location. Everything is a hundred percent better. Even the rail equipment is better," he said back at the truck show last spring.

We spoke over the phone a few days ago.

Carlos said things had fallen off a bit. He's keeping busy, but not every day. He doesn't get the Iowa loads like he used to. Still he has no immediate plans to go back over-the-road.

"A lot of guys quit containers. They go back over the road. After the expenses, you're not making the same thing. [They say] 'I'm not even home!' They wind up selling everything they bought and they come back and start doing containers again."

For Alizondo, it's more about finding your fit: "You have to do what is in style where you live. Whatever is popular where you live, that's what you need to get into. Luckily for me [containers] caught on. It’s starting to pay good, and they're starting to attract more and more people. 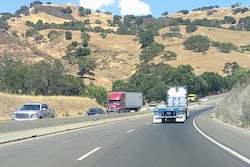 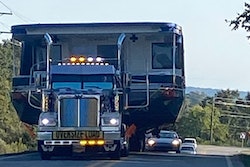 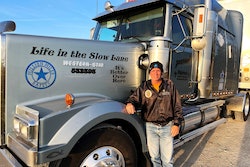