In addition to its advanced mapping system and pedestrian awareness systems highlighted by the company in a global press event last week (detailed here by Overdrive and more in-depth on OD sister site CCJ), Continental offered a ride in its Innovation Truck — a concept vehicle the company uses to test platforms in development.

The 2014 Mercedes Actros is loaded with futuristic systems the company is fine-tuning for deployment. Though the Actros is a European tractor, the technologies the company showcased translate to the North American market.

As highlighted in the video above, the two systems it showcased to press last week in the Innovation Truck were the 3D Surround View — a camera system that creates a 360-degree view of the truck’s surroundings, which is showcased on an in-cab monitor — and Continental‘s speakerless sound system, called Ac2ated Sound. See details on both systems in the video at the top of the post. 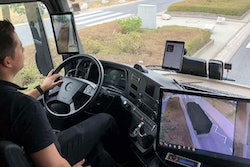