Any problem with drug or alcohol use by drivers or violation of testing protocols among carriers large and small can ensure that the Federal Motor Carrier Safety Administration will be “watching you for a long time,” says independent regulatory consultant Richard Wilson in the podcast below.

It’s a revisit with a conversation I had with Wilson last year about federal safety interventions in the CSA program, and in the audio he urges those shopping for a testing corsortium to make every effort to ensure the consortium is equipped to its job. Namely, to random-test pools of drivers for alcohol at the rate of 10 percent in any given year and for drugs at 50 percent. And to be able to provide documentation they’ve done so. (Wilson can be found via the website for his TCRG Consulting.)

With the national test-results database proposed rule at the end of the comment period, and associations and assorted individuals having officially weighed in, another story Wilson told me last year came to mind as well. You can read here about the ringer FMCSA sent one owner-operator through after the operator put on another truck and hired a driver with a past positive drug test he didn’t know about, despite taking all the appropriate cautionary measures.

As I wrote then, had the test-results database been around, it’s likely said ringer could have been avoided. The database could well become a useful screen for small and large carriers alike, provided it’s not a garbage-in-garbage-out type of system. But some want to turn it into an employer-reporting well, whether or not positive test results exist. As reported here, ATA, TCA and CVSA among others asked for a supplemental proposed rulemaking to require carriers to “report all instances of actual knowledge of misuse, including direct observations of misuse and acknowledgements of misuse, to the proposed clearinghouse.”

Misuse of controlled substances, that is. OOIDA objects that the database should not be a repository of unverifiable he-said/she-said-type information. It would no doubt give rise to disputes that have long mired drivers similarly after contentious employer statements on drivers’ DAC Reports.

Read more about the issues via the stories linked above.

Stop by a scale, get some information!
And should you be in need of some CSA-related information, you could read Overdrive from time to time, or you could stop into your friendly neighborhood scale house next week , says the FMCSA, to pick up materials to educate yourself and others on the CSA program. Yes, next week Tuesday-Thursday is the annual Roadcheck inspection blitz and outreach program taking place across the nation. I have it on fair authority that that information, if you show up in a big truck, will well likely come with a complimentary Level 1 as a cherry on top. If you’d rather forgo the extras, you can access the same material, part of the agency’s “Get Road Smart” initiative, here. 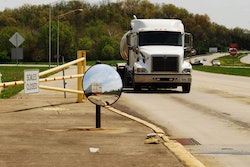 What to expect during Roadcheck 2014