Max Heine
Jun 27, 2014
Jonah Hill plays the character in “Moneyball” who convinces the manager played by Brad Pitt that he should recruit players based on a close examination of their personal data.

Load One expediter Tom Evans drives team with his wife, running a Class 8 straight truck fleet of three based in Mattoon, Ill.

He’s been impressed with Load One’s use of a driver rewards program created by Stay Metrics that starts with driver surveys during their first weeks with the carrier. The company uses those results to focus on shoring up weak relationships. Those relationships are strengthened further with a program that allows drivers to earn points redeemable for merchandise.

“The biggest thing is simply getting rewards for doing something that’s no more than what you’re already supposed to be doing,” such as turning in logs on time and completing surveys, Tom Evans says.

What Stay Metrics offers is but one version of ways that data-managing vendors are helping fleets improve retention and safety. Fleets for years have used performance data in driver scorecards to help identify and address problems. Now, with the help of companies that specialize in collecting and analyzing data, fleets are trying to go beyond identifying problems. They aim to head them off before they happen.

The results have been impressive, and though more and more data is being gathered on drivers, and in some cases more questions being asked of them, no major complaints have emerged within the industry. However, broader worries over privacy or misapplication of data-based conclusions have been voiced elsewhere.

Such concern was expressed by one major fleet using a predictive analytics company. The fleet’s media contact, declining an interview request, wrote that “it’s a topic we aren’t eager to talk publicly about due to its tendency to be used in litigation.”

An expert in the field says he’s unaware of actual litigation based strictly on predictive modeling practices. Still, there has been controversy, says Eric Siegel, founder of the Predictive Analytics World conference series and author of “Predictive Analytics.”

His book explains how retailing, with marketers on a never-ending quest to pinpoint the best customers, is one major area for using predictive analytics. In trucking, though, the focus isn’t on buyers, but drivers – namely, which ones are about to leave the company or have an accident.

As for improving safety, whether in trucking or any field, ethical concerns “are few and none,” Siegel says. But when it comes to concerns over companies using data to reveal personal problems that could affect loyalty or performance, “there are places where the world is not comfortable with that yet,” he says.

Perhaps the most publicized human resources application of predictive analytics involves Hewlett-Packard. In 2011, two HP scientists analyzed data on all of more than 330,000 HP employees to measure each one’s “flight risk,” or chance of quitting.

The intention is to help managers prevent good employees from leaving. Siegel reports the program has had modest success at HP.

Still, there can be problems, as he points out: “What if your score is wrong, unfairly labeling you as disloyal and blemishing your reputation?”

Here the application to trucking is more direct. With turnover rates so high, predictive analytics could become a major tool.

So far, its use in human resources largely has held to the high road, say Siegel and those involved with it in trucking.

“We’re not peering into drivers’ personal lives,” says Vikas Jain, general manager of Fleetrisk Advisors, a leading predictive analytics provider. “We’re not accessing any data the fleet doesn’t already have. We are helping the driver.”

That process can involve identifying driver stresses unrelated to trucking. However, no major complaints related to predictive modeling have come from members of the Owner-Operator Independent Drivers Association, says spokesman Norita Taylor.

The following video in Overdrive‘s 30-second-tips series breaks down the basics of predictive analytics. 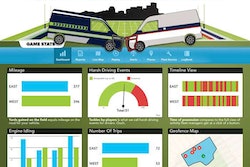 In the huddle with football, fleet stats