Wisconsin-based owner-operator Jason Hurley, a former Schneider-leased owner-operator, made a move earlier this year to the young operation of CloudTrucks. That Texas-based company, with some operations in California, pitches to owner-operators as a "virtual carrier," operating less like a traditional asset-based carrier and more like a support company, basically. Cloud puts emphasis on its technology and systems in place to support otherwise independent businesses.

Yet they're no broker or dispatch service – it's CloudTrucks’ motor carrier authority under which an owner leased there runs.

And though its model generally is tech-assisted self-dispatch, in terms of how owner-operators run there, the carrier does field a functional support staff on the back end to smooth out the rough edges of any carrier-broker transaction. The brokered freight market comprises the large majority of its freight universe. Since founding within the last years, they’ve grown quickly. They were up to more than 70 owner-ops leased as of the company’s most-recent MCS-150 federal update earlier this year.

Hurley was attracted initially to a percentage contract for compensation whose fees are lower than is traditional for asset-based companies taking care of leased owners' liability insurance. CloudTrucks allots 5 points of its 15%-per-load fee to the owner-operator's liability insurance, Hurley said, leaving a 10% fee otherwise for access to the company's freight platform and support networks. What he's found so far there? Take a listen: 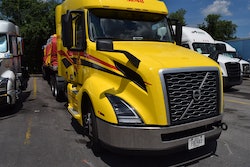