As the California Trucking Association prepares to go to the Supreme Court over California's controversial AB 5 law, the Ninth Circuit Court of Appeals has granted a motion to keep in place an injunction that exempted the trucking industry from the law.

That same court on Monday denied CTA’s request for a rehearing of the case after ruling in April that AB 5’s ABC test for determining independent contractor status in California should apply to the trucking industry, essentially banning the leased owner-operator model in the state.

Hirschbach has a current driver/operator base of 2,200 and is expected to exceed 2,400 after the integration with Lessors.

“We’re very excited to welcome the Lessor drivers along with their mechanics and office staff to the Hirschbach family,” said Brad Pinchuk, CEO and owner of Hirschbach. “It’s an organization I’ve admired for decades.”

The acquisition will allow Hirschbach to expand its freight capacity and offer additional services to its customers.

“Lessors has a reputation of providing a high level of service to their customers, an outstanding safety record, low driver turnover, and running very nice equipment, which is meticulously maintained,” Pinchuk said.

Lessors was founded in 1983 by James and Wendy Shapiro. The company specializes in transporting time sensitive, temperature-controlled products, and operated with three terminals in Eagan, Minnesota; Dover, Florida and Caldwell, Idaho.

ASG has other properties in the transportation sector, and the freight brokerage market is “ripe for innovative companies,” said Jesse Buckingham, who joins Trucker Tools from ASG as chief revenue officer.

In the last 5 to 7 years, a number of well-funded digital freight brokers have tried to disintermediate the transportation industry by developing freight matching technology that connects shippers directly with carriers, but their impact “hasn’t been quite as significant as many were expecting,” he added.  “Brokers are here to stay.”

Freight brokers that are trying to innovate while honoring their relationships with carriers have created space for technology providers, like Trucker Tools, to help with digital transformation, he sa. “We are excited about Trucker Tools as a leader in that space.”

ASG has made 35 acquisitions to date and specializes in helping software-as-a-service (SaaS) companies grow and build out reliable, resilient software services.

“Their philosophy, mindset and approach complement Trucker Tools culture and values, and are well-aligned with our laser-focus on superior customer engagement and product performance,” said Prasad Gollapalli, founder and CEO of Trucker Tools.

Headquartered in Reston, Virginia, Trucker Tools was founded in 2013. About 300 freight brokers are on the platform today, along with almost 1.4 million truckers and 170,000 small fleet operators using the mobile booking and tracking app.

Gollapalli added that Trucker Tools plans to accelerate its software development under the new ownership. “There are a lot of things we have been wanting to do in this space,” he said. “We are still faster than most companies, but we’d like to take it to the next level. With this partnership, we will be able to do that.”

Trucker Tools and ASG did not announce financial terms of the acquisition. 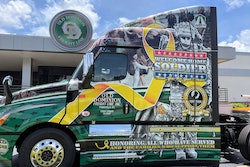