He began his trucking career in 1990 at the age of 18 doing local delivery work for Coca-Cola before briefly going over-the-road, then returning to regional work hauling gasoline tankers around Iowa, Wisconsin and Illinois. From there, he got into hauling liquid petroleum, and his hauls found him farther afield -- down to Florida and other, warmer places in the winter. He then started hauling anhydrous ammonia and doing other tanker work.

Around 2000, Hallahan bought his first truck but “I lost my butt and went bankrupt,” he said. “I learned all the money from trucking didn’t go to you, it went to the truck. I learned the hard way. I was young and dumb.”

Following that experience, he was a company driver again for about seven years before giving an owner-operator business another try.

He bought a 2006 Kenworth W900B when he started LaCrosse, Wisconsin-based Hallahan Transport with his own authority in 2016, driving it for a year and a half before he hired a driver who wanted to lease on to his business. He sold the truck to that driver, who then leased on with him.

“He blew the motor out of it and left it sitting on the side of the road,” Hallahan said. “That gave it back to the bank, then I bought it back from the bank," got it in full working order and sold it to another would-be owner. By that time, though, Hallahan had bought a couple other trucks.

Hallahan has seen steady, quick growth in his business since its 2016 start. The school of hard knocks taught him what it takes to be a successful owner-operator, and since hanging out his shingle with his authority, he's used that experience to grow his business from a one-truck operation to having as many as 12 trucks in his mostly dry van-hauling fleet, a mix of company equipment and owners leased on, some of whom he's assisted in the transition from company employee to independent contractor owner-operator. Hallahan Transport is among 10 semi-finalists for Overdrive's 2021 Small Fleet Champ award.

Throughout 2017, Hallahan drove full-time over-the-road, dispatching his own loads as a single-truck carrier. By 2018, he had purchased a new truck and added a lease-purchase operator. In 2019, he decided to grow the business by adding two more trucks and trailers. Then again, in 2020, he doubled in size and by the end of last year, Hallahan had come off the road to work in the office dispatching, negotiating loads and managing the business full-time.

“I’ve always had that as my goal,” he said. “I didn’t want to drive anymore – I wanted to run a company. So, I was getting to the point with six trucks [where] I couldn’t truck anymore. It’s too hard to keep up with dispatch and do your safety, keep track of everything when you’re running more than six or seven trucks, unless you have a dispatcher. But I didn’t want a dispatcher because I thought, ‘Well, a dispatcher isn’t going to do it as well as me, and a dispatcher can ruin your company really fast.’”

He pays all drivers on percentage pay. Company drivers net 25% of the load, while both owner-operators and lease-purchase haulers get 80%. The company does mostly dry van work, hauling a lot of beer, soda and water. Hallahan also offers a specialized pad wrap service for some customers.

Because his drivers are based all over the country, Hallahan doesn’t offer health insurance, but he does provide his company drivers with a $250 monthly stipend to go toward their own health insurance policies – whether it’s their spouse’s policy or one they purchase on their own. Company drivers also get paid holidays and vacation days.

Owner-operators get to take advantage of discount programs for fuel and tires, and Hallahan also has discounts he can pass on to his owner-operators on trucking insurance through Great West Casualty.

He offers bonuses for clean inspections. If a driver passes a full inspection, he or she gets a $100 bonus. A clean Level 3 credentials inspection nets $50.

These days, when Hallahan purchases equipment for the fleet, it’s always brand-new trucks and trailers – and the trucks are often show-truck-quality Peterbilt 389 models. The latest 389 he bought has a 300-inch wheelbase and is “fully-loaded and decked out,” Hallahan said. “My drivers deserve it because they work hard and they take care of them. I’ve got a really good group of guys, and it keeps them happy when they’re driving.”

“I want them underneath the truck, checking things out, greasing it and everything else,” he said. “Anybody can go around and do a walkaround inspection. That’s not going to really tell you what’s going on underneath it. I think an annual DOT inspection is a little overdue.” 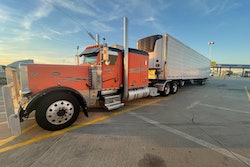