Time is running out to enter the Overdrive/Truckload Carriers Association Owner-Operator of the Year contest, which pays $25,000 to the winner.

Applications to enter the contest are being accepted through Monday, Oct. 25. Owner-operators and small fleet owners with no more than five trucks, where the owner still drives, are eligible to enter.

The competition is intended to recognize those with strong safety records who’ve also improved the image of trucking and served their communities. The owner-operator award also recognizes best business practices.

Owner-operator Bryan Smith was named the 2020 Owner-Operator of the Year at the end of September. Company driver Betty Aragon with Wilson Logistics was the Company Driver of the Year winner.

Meet the three finalists for the 2020 Owner-Operator of the Year in the video version of the Overdrive Radio podcast from the awards ceremony below: 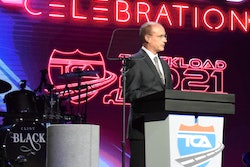