A lion tests a model’s mettle

In the 1960s and ’70s, Overdrive readers anticipated nearly every issue’s Date Master of the Month or Miss Overdrive. Those attractive young women (although a hairy-chested guy was the February 1972 sweetheart – more on that later) gave each sparkling truck behind her on the cover a run for its money on eye candy.

Former model Carrie Shuster posed with a lion for photos in her cover story, which was featured in the March 1975 issue. She recalls getting face-to-face with the large predator who roared before the photo session ended at OverdriveRetro.

Peasant blouses, platform shoes and hot pants of the ’70s for many readers are reminiscent of a time that may now seem innocent in its connection with a hippie-era ethos that preached so-called free love but also one that roiled with massive change and unrest — and truckers’ strikes.

Through it all, many truckers and former models, like Shuster, flourished against some tough odds in careers that supported families and fulfilled some of life’s early hopes and dreams. Read about her here. 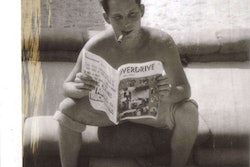