In celebration of the new millennium, Overdrive’s January 2000 issue featured a 3D viewer and 3D images on the cover, poster and ads, which you can read more about at OverdriveRetro. Volvo Trucks North America sponsored the poster and viewer, while Mack Trucks, Cat Scale and International provided other 3D images in their advertisements.

Although 3D glasses were a fad at movie houses even in the 1950s, they had not become a fixture in user-friendly circles for reading or watching movies until recently with, first, a surge in 3D video gaming, and now even on TVs. Overdrive may have portended another future trend.

Part of the preparation for the special issue, artist Boris Starosta, then of Charlottesville, Va., designed the 3D images for the cover and the poster included inside the magazine. He described his philosophy of 3-dimensional art. “Not only do you see the third dimension, which is invisible in a 2-D picture, but also you discover wholly new relationships between the objects and subjects.”

Read more about the futuristic issue at OverdriveRetro. And if you still have your copy of the January 2000 Overdrive, write and let me know if you are still hanging on to that blue and red viewer, at LCoulter@rrpub.com. 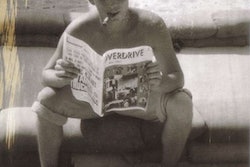