Many of you responded to Thom Jansen, who wrote in wondering just what happened to the old credo of truck drivers to ride in the right lane unless passing — Jansen, who learned such from his father, a trucker and longtime Overdrive reader, expressed no small measure of aggravation finding rigs “clogging up the middle lane.”

He wanted to know the reason few seemed to mind the old “stay right” credo, asking this question: “Has something changed, or are they just not as “professional” as they once were…?”

Readers delivered these and other answers:

Commenting at OverdriveOnline.com
Gordon Alkire: Yes, Thom, things have changed. It is not all the truckers that have changed. The change is faster, smaller cars. Less driving skill is the norm for drivers of all vehicles. Likewise not having to take responsibility for actions. Traffic is heavier and tempers are less-controlled. If I’m on at least a three-lane, I will not drive in the right lane if in town or near several exits. Far too many idiots will cut in front to take an exit because they cannot follow a truck for 500 feet before they exit. Merging is another story. Few drivers of all vehicles know how to merge. They bull their way into traffic instead of merging properly, seldom use turn signals, and if you don’t move over they think you’re the bad guy. I try to avoid these types of drivers as much as I can. That is the basic reason I do not stay in the right lane unless the law states otherwise.

Brad Lambert: I could understand your complaint when the traffic is very light and a truck is in the middle and/or fast lane. During rush hour I will stand up for the truck driver — we get out there to get out of the way of all the vehicles getting on and off the highway. To say you have a father that was a truck driver is not good enough — you have to spend three weeks in the seat of a truck driver and you will understand.

On Overdrive‘s Facebook page
Karen Moore: Usually the right lane is so rough I get tired of getting beat to death, so I run in the left lane — as long as I can maintain the speed limit.

Jimmy Nevarez: The right lane is the lane with the most resistance and creates an unsafe position for a truck who needs to leave an “out,” especially in the case of a split-limit state.

Nelson Arnold: With three lanes through a metro area, the middle lane means less slowing down and speeding up for merging traffic that does not understand the concept of merging.

Thom, I have been driving a tractor-trailer for the past 17 years, and I will tell you what has changed. The ambient driving environment on the highway is not conducive to the “Horse and Buggy” mentality that you are attempting to apply in your letter. There are a lot more cars and not so many trucks (due to increased intermodal usage) on the road today. There are also a lot more work zones and lane closures due to road construction that hinder the flow of traffic.

The so-called truckers that you refer to as “driving down the middle lane of the highway for miles” are doing so to avoid conflicts with the carefree, shopping-mall-cruising four-wheelers who never yield upon entering a highway.

Without so much as a casual glance in their side-mirrors, these highly-skilled car drivers wait until they are at the “point of no return” on an on-ramp before they realize that they are about to run into an 18-wheeler passing the ramp. The truck is unable to change lanes due to another skilled car driver quickly moving to block it.

We are also in the middle lane to navigate past the increasing amount of vehicles (car and truck) that seem to demonstrate an increased propensity for pulling over on the shoulder of the road for every little thing. A breakdown is a breakdown. You can’t blame people for random misfortune. However, I see cars on the shoulder to change drivers, to get items from the backseat or the trunk and other things that could wait until the next off-ramp or rest area.

Lets get down to the crux of the matter, the real reason for Mr. Jansen’s letter. “During the rush hour, it’s aggravating to find them clogging up the middle lane, which results in other drivers (presumably cars) passing them on both the right and left side. Whenever I see them in the middle lane, I usually think they are not real truck drivers….” Enough, Mr. Jansen, you just don’t understand the fundamental differences between a car and a truck, so you don’t get it. Here are some quick comparisons between a car and a truck, that I hope will enlighten you and put things in proper perspective:

Cars:
*Able to accelerate rapidly, on-demand
*Able to abruptly change lanes with little or no forewarning, in close spaces
*Driver believe they have some sort of right-of-way, over trucks

Tractor-trailers:
*Once brakes are applied, very slow to accelerate back to highway speed due to gear shifts
*Driver must make sure that cars around him will permit a lane change, so as not to hit anyone
*Know that they have equal right to safely use the highway with cars

As a professional tractor-trailer driver, I confess that I am one of those annoying trucks in the middle lane, trying hard to avoid conflicts and stopping in the right lane during your morning rush hour traffic. Although I am traveling at or above the speed limit for the roadway, you are annoyed that I am “clogging up” the highway with my large vehicle (that you can’t see around). This is because car drivers think that it is OK to do whatever is necessary to get to work quickly, especially speeding on the highway, then cutting across three lanes of the highway at the last minute, to get off at their exit. The slow-moving truck (slower than the cars) in the middle lane prevents that expedience. I’m sorry I annoy you.

I have good news for you, Mr. Jansen. The FMCSA, in their infinite wisdom, was also inconsiderate of your needs when they recently modified the hours of service regulations. Now in order to reset their hours every week, many of the annoying trucks that used to drive at night will be right there on the highway with you in the morning. They have changed to daytime driving so they can continue earning a living six days a week.

The good news is I’ll be out there too! Maybe we can stop for coffee at Tim Horton’s some morning? I’ll buy. –George Anis, Professional Truck Driver 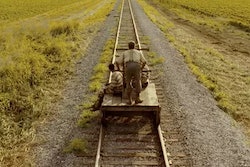