This is the first part of a three-part series on truckers’ personal safety, specifically as it relates to carrying weapons on the road. See Part 2, which details stories of truckers who choose to carry and why, at this link. See Part 3 on gauging the veracity of federal action on the issue of truckers’ right to carry at this link.

On Dec. 30, truckers across Poland honked their horns to pay homage to murdered trucker Lukaz Urban, whose truck was commandeered by Tunisian jihadist suspect Anis Amri. The truck crashed into the Berlin Christmas market, killing 12 people. The incident followed a truck terror attack on Bastille Day, July 14, in Nice, France, where 86 people died and 434 were injured.

Kat Morris, an owner-operator and Iraq veteran who has a concealed-carry license and carries a .40 caliber Ruger, wonders if an armed Urban could have prevented the attack or saved his own life. Any answer would be speculation, but the question is increasingly real for more truckers.

ISIS is encouraging truck attacks. More than 60 percent of surveyed OverdriveOnline.com readers say they believe an attack using a truck is likely to occur in the United States. The United States has had two truck-related attacks – the first World Trade Center attack in 1993, and the Oklahoma City bombing in 1995.

Much closer to over-the-road truckers’ daily routine, though, are threatening encounters at truck stops, rest stops and docks.

Cargo theft occurs about twice a day, reports FreightWatch International. Countless other incidents against truckers, many of them unreported, also occur regularly.

Even road rage can escalate into the use of weapons. Last month on Interstate 20 in St. Clair County, Alabama, two truckers got into an argument. One shot the other in the stomach.

While reason might indicate that those working in such a dangerous occupation should be allowed to carry guns, other factors weigh against that. One is the checkerboard pattern of state laws pertaining to commercial drivers carrying a gun.

The other is that most fleets have zero tolerance for weapons in trucks because the liability is too great. They consider any breach, even by leased drivers, to be a fireable offense. That’s the case even if the driver was carrying the weapon in a state that allows a gun on a commercial truck.

Carrying a gun is not the only solution to the risks of overnight parking. Jason’s Law, passed as part of the 2012 Transportation Reauthorization Bill, provided federal funding for states to improve safe truck parking. The law developed in response to the 2009 robbery and murder of trucker Jason Rivenburg while he was parked at an abandoned lot in South Carolina after failing to find a parking place.

The National Coalition on Truck Parking also continues to work for parking safety measures, but while the industry applauds such initiatives, they go only so far to neutralize criminal threats against truckers. In an Overdrive survey last year with 990 respondents, about three in four drivers said they have felt endangered while on the road and wished they had been armed at some point in their trucking career.

Apart from the risk of carrying a gun when leased to a carrier that forbids it, the patchwork of state laws, including varied reciprocity agreements, creates other risks.

See the stories behind why these truckers carry — or don’t — at the links below:

Some states issue permits only to residents, while others also issue to nonresidents. Some states have “permitless carry” laws, which means that anyone legally possessing a firearm can carry it concealed. Some states accept outside permits from only one or more certain other states. And there are many exceptions or qualifications.

USACarry.com has a map that shows state-by-state reciprocity, as well as exceptions and other details for certain states.

If you know you are crossing into a state without the right to carry, you should have your firearms unloaded, locked and stored in an inaccessible area. The ammunition needs to be stored separately in a locked location.

Don’t take any chances with military bases, which are strictly off-limits for concealed carry. Some other locations, such as Native American Tribal lands, also prohibit firearms.

And American truckers might want to think twice about bringing a gun into Canada. Recently, Marion Furman Taylor Jr., 55, was ordered to pay $7,500 in fines in a court in Penticton, Canada, after pleading guilty to three firearms-related counts.

Taylor had entered Canada in April with a trailer full of canoes and kayaks and a case with a loaded Beretta and Smith & Wesson .38 caliber revolver. He forgot the weapons were on board.

“The Canadian attitude toward weapons is very different than in the U.S.,” the judge told Taylor.

For someone with irregular lanes in all 48 states, constantly checking states can seem more trouble than it’s worth. Nevertheless, “Ignorance of the law is no defense,” says Brad Klepper, executive vice president and general counsel for Driver’s Legal Plan. “A firearm violation depends on where you are. In some states, it’s a misdemeanor, and in others, it could be a felony.”

If you get into an encounter with law enforcement regarding a gun on your truck, Klepper recommends what he would for any trucker-trooper interaction: “Be professional, courteous and, most of all, honest.”

An owner-operator, speaking off the record because of his company’s gun policy, recalls being stopped and volunteering to the officer his concealed-carry permit and his Smith & Wesson 357. He and the officer realized they had the exact same weapon and spent 10 minutes talking about guns.

“I’m always respectful and very professional toward law enforcement,” says the driver. He wasn’t ticketed and says he’s never been hassled by law enforcement over his weapon.

Depending on circumstances and how you present yourself, there could be minor or even no repercussions. Also, keep in mind that there are personal safety measures that do not involve weapons.

Independent Anthony Grandinetti, who has had his share of drivers with road rage and even has dashcam video of a four-wheeler pointing a gun at him, says he always stays calm.

“Even though I have a weapon, I also believe in common-sense self-defense,” he says. “I have locks and security equipment and always make good parking decisions in well-lit areas. At the end of the day, I want to make sure I come home to my wife and kids.” 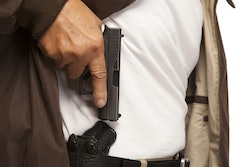