For truck drivers with concealed carry permits, the bill would make it easier to determine which states would or would not honor their permits.

The bill, titled the “Constitutional Concealed Carry Reciprocity Act of 2019” and introduced by Sen. John Cornyn (R-Texas), is co-sponsored by 33 other Republican senators.

In a press release announcing the legislation, Cornyn said the bill would treat state-issued concealed carry permits like driver’s licenses where an individual can use their license to drive in other states, but still must abide by that state’s speed limit and road laws.

In the last Congress, the same legislation had 40 co-sponsors, and in the 113th Congress from 2013-2015, a nearly identical amendment received 57 votes in the Senate, including 13 Democrats, Cornyn said. Neither of the previous attempts to expand reciprocity were successful.

The bill was introduced in the Senate Jan. 9 and referred to the Senate Judiciary Committee, which will have to approve the bill before it goes before the full Senate for a vote. If the bill gets through the Senate, it will be sent to the House. 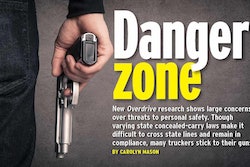