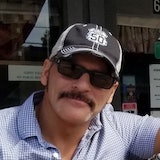 Robb Mariani is erstwhile host and executive producer of the "American Trucker" TV series and long ago laid claim to a love for the smell of diesel in the morning. He's been among advocates of the trucking business and lifestyle since he was a young boy, roaming his local Union 76 truck stop on a regular basis. Shining a spotlight on all aspects of trucking during his multiple seasons of "American Trucker," Mariani has hit the highway once again -- he's filming a new trucking-themed series called "Smoke and Mirrors." Going behind the smoke and the mirrors, he and his longtime friend, small fleet owner Brad Wike, seek to uncover trucking's past, present and future through the series.

How does $350K-plus raised for Brenner Children's hospital in Wake Forest sound? Robb Mariani was there, detailing sights and sounds from the headquarters of Bottomley Enterprises in storied Mount Airy, N.C. All in all, a "truly astonishing" event. ...
October 19, 2021
Page 1 of 1
Top Stories