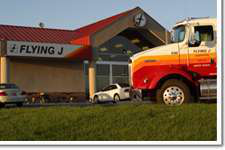 Flying J Inc. and its debtor subsidiaries announced July 7 their reorganization plan – which provides for the payment of its creditors in full in cash, plus interest – has been confirmed by the U.S. Bankruptcy Court for the District of Delaware.

Flying J said since filing for Chapter 11 bankruptcy protection in December 2008, its restructuring has improved the profitability of its core businesses, including a merger of the company’s retail operations with Pilot Travel Centers of Knoxville, Tenn.

Flying J also has refinanced some of its debt and sold certain noncore assets, including Longhorn Pipeline, Flying J Oil and Gas, Haycock Petroleum, and Big West of California. The company said these transactions have enabled it to operate more efficiently as well as to repay in full the $1.4 billion owed its creditors. The distributions on allowed claims of the company’s creditors are expected to begin in July.

“We have had to make some very difficult decisions over the past 18 months to maximize value and pay back our creditors,” says Crystal Maggelet, Flying J chief executive officer. “Like many companies in today’s economy, this meant job loss for some employees, many of whom have been with us a very long time. Impact on employees has been the most difficult part of the restructuring process. We are now poised for a bright future.”

Post merger, Pilot Flying J will continue to operate the Flying J locations under the Flying J brand. To reduce confusion, Flying J Inc. will change its corporate name to FJ Management Inc., which will continue to own and operate the Big West Oil refinery in North Salt Lake, Utah, and Transportation Alliance Bank, plus maintain an ownership stake in TCH (Transportation Clearing House) and in the recently formed Pilot Flying J nationwide network of travel centers.