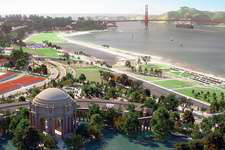 Major construction is under way on the Doyle Drive Replacement Project in San Francisco, one of the nation’s largest, most complex and labor intensive American Recovery and Reinvestment Act-funded highway projects.

For more than a half-century, replacing Doyle Drive has been a priority for state, local and federal officials. ARRA funding helped this project begin a year earlier than originally planned. When completed in 2013, the project will replace the 73-year-old Doyle Drive southwest of the Golden Gate Bridge. The project also will result in structural and seismic improvements to the Presidio Trust and the Golden Gate National Recreation Area nearby.

The new access to the Golden Gate Bridge from the south side will feature six lanes and a southbound auxiliary lane of new roadway for 1.5 miles from the bridge through the Presidio Trust to Richardson Avenue/Lombard Street. The improvements will reduce the risk of an earthquake cutting off this key commercial artery for the Bay Area. Doyle Drive is the city’s primary access route from the Golden Gate Bridge and links San Francisco with San Mateo and Santa Clara counties to the south and Marin and Sonoma counties to the north.