FMCSA proposes to mandate onboard recorders

All interstate commercial truck and bus carriers that now use logbooks to track compliance with hours-of-service regulations would have to use electronic onboard recorders (EOBRs) instead under a proposed regulation issued by the Federal Motor Carrier Safety Administration on Jan. 31.

The proposal would relieve carriers of the current requirement to retain certain HOS documents, such as delivery and toll receipts, that are now used to verify the number of hours the vehicle is in operation. Approximately 500,000 carriers would be affected by the proposed rule, FMCSA said.

Last year, the U.S. Court of Appeals for the District of Columbia ordered FMCSA to issue a notice of proposed rulemaking (NPRM) on HOS supporting documents by yearend. In December, the court gave the agency another month — until Jan. 31 — to comply. The court order stemmed from a lawsuit the American Trucking Associations filed just over a year ago to compel FMCSA to move forward with a regulation as mandated by Congress in the mid-1990s.

By the time ATA filed its lawsuit, FMCSA had already announced that it was planning to link new regulations on supporting documents to an expansion of the EOBR mandate. In April 2010, FMCSA issued a final rule requiring carriers that have a history of serious log violations to install EOBRs. That rule takes effect in June 2012.

“We cannot protect our roadways when commercial truck and bus companies exceed hours-of-service rules,” Transportation Secretary Ray LaHood said yesterday. “This proposal would make our roads safer by ensuring that carriers traveling across state lines are using EOBRs to track the hours their drivers spend behind the wheel.”

“This proposal is an important step in our efforts to raise the safety bar for commercial carriers and drivers,” said FMCSA Administrator Anne Ferro. “We believe broader use of EOBRs would give carriers and drivers an effective tool to strengthen their HOS compliance.”

The Owner-Operator Independent Drivers Association saw it differently. “EOBRs are nothing more than over-priced record keepers,” said Todd Spencer, executive vice president of OOIDA. “This proposal is actually another example of the administration’s determination to wipe out small businesses by continuing to crank out overly burdensome regulations that simply run up costs.”

OOIDA said EOBRs cannot accurately and automatically record a driver’s hours of service and duty status. They can only track the movement and location of a truck and require human interaction to record any change of duty status. Therefore, such as in the case of loading and unloading time, the device is incapable of determining the actual duty status of drivers without interaction from drivers indicating to the device that they are on-duty. Loading and unloading time should typically be logged as “on-duty, not driving” in order to accurately reflect the hours a driver has worked.

OOIDA also contends that by insisting on pushing for this mandate, the government ignored a federal statute to ensure that EOBRs will not be used to harass vehicle operators. An analysis conducted by the Federal Motor Carrier Safety Administration said that “companies use EOBRs to enforce company policies and monitor drivers’ behavior in other ways.”

The proposal and information about how to submit comments is available by clicking here. For more information, go to www.regulationroom.org. 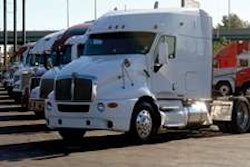