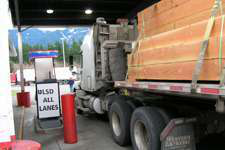 After declining the previous week, the national average retail price of diesel increased 2.5 cents to $3.932 a gallon during the week ended March 28, according to the U.S. Department of Energy’s Energy Information Administration.