Koch & Sons driver John Borman, while preparing for the written portion of the Minnesota Truck Driving Championships earlier this summer, had a brief moment of inspiration. “I had just unloaded at Cummins in Bristol, Pa., and was waiting for a reload,” he says. Championship contenders, he adds, “were all given a small handbook to read, and all the questions on the written test in the competition would come from that handbook. So I would study the book whenever I got the chance. That is the book I am reading in the picture,” which wins the Truckers News August photo challenge.

Borman is rare among photo challenge contenders in his use of a film camera. He took this self-portrait with a Canon A-1 using a 17-millimeter lens, he says. “I just set the camera on the ground a few feet away, set the self-timer, hit the shutter button, and quickly went over and sat down.”

Borman received Bryan Peterson’s Understanding Exposure guidebook, as well as publication in Truckers News’ October issue, as prize. As for the wait-time studying, he says, it paid off: “I did pretty well on the written test in the competition.”

Take advantage of the good weather this month to venture out into public places for pictures to compete in this month’s challenge – anything’s fair game, from rest areas to public roadways, parks or other spaces. Winning photos will be published in the November Truckers News, and this month’s winner also receives Ben Long’s “Complete Digital Photography” guidebook.

Drivers can enter via our Flickr photo group or by posting photos on our Facebook page’s wall and following up with an email of details to Senior Editor Todd Dills. Drivers with a photography interest are still encouraged to join the group. Find full contest rules below.

Past winners of the challenge aren’t eligible to compete for the prizes for six months, but are encouraged to shoot to the theme.

To enter to the September challenge

Via Flickr
1. Post your appropriately themed, high-resolution (at least 1,500 by 900 pixels) photo to the group pool here by midnight Sept. 30. (Alternately, you may email Todd Dills at tdills [at] rrpub.com if you’re having difficulty posting.)
2. Send an email with your full name, location/mailing address and your trucking business’ profile in brief (who you drive for or whether you run on your own authority as an owner-operator, etc.) to Todd Dills at tdills@rrpub.com — include “photo challenge” in the subject line and a link to the original Flickr location of your entered picture as well.

2. Send an email with your full name, location/mailing address and your trucking business’ profile in brief (who you drive for or whether you run on your own authority as an owner-operator, etc.) to Todd Dills at tdills@rrpub.com — include “photo contest” in the subject line and indicate your Facebook profile name if different from your actual name.

3. Attach the highest-resolution version of the picture you posted to the Facebook page. 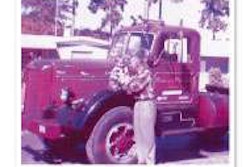