We looked at the Freightliner Cascadia here earlier this year, but this one is different. Way different. It’s the 2014 Cascadia Evolution. When it becomes available early next year (ordering is open already), Evolution will offer revisions to the Cascadia’s already extraordinarily good aerodynamics with a package that wins a few more decimal points in miles per gallon.

Also, some changes to the fuel and air handling systems on the DD15 engine bring a contribution that, old model to new model, shows 7 percent fuel savings. It was hard to imagine how the Cascadia could be much improved. But it has been, and since the changes impact the pocketbook, they are significant. Paired with the new Detroit DT12 smart transmission, it’s a combination that’s hard to beat.

We were let loose in the demonstration truck for these and some other new components that, bundled together, allowed a test-track fuel economy of 10.67 mpg. To prove this wasn’t just the result of tricky test procedures, the same truck was employed in an over-the-highway Evolution of Economy Tour, a run from San Diego, Calif., to Gastonia, N.C. Those real-world conditions yielded 9.31 mpg with a nearly maxed-out load.

This truck could push fuel economy close to the magical 10 mpg. According to former Overdrive Owner-Operator of the Year Henry Albert, driver on the Cascadia Evolution tour, if he had not been quite so restrained by the protocols of the run, he might have broken that magic number himself.

Aerodynamic efficiency improvements here are subtle – likely only possible because Freightliner has its own wind tunnel at the prototype shop on Swan Island, just outside Portland, Ore. Hood and bumper closings keep air flowing to the sides. A change to the air dam under the front reduces the amount of air flowing under and becoming trapped in the engine compartment or around axles and the suspension.

A smaller radiator for less air to pass through saves some weight yet adds some durability and reliability with a new mounting. It’s the result of the switch to selective catalytic reduction, requiring less cooling need for the still-present exhaust gas recirculation in the 2010 DD engines. But at the same time, the new radiator has a revised baffling system for greater efficiency.

Also new is the adoption of an asymmetric, waste-gated turbocharger for the “fleet” horsepower ratings like the 455-hp DD15 we tested. By dispensing with the turbo-compounding on these lower-rated engines, there is an economy gain and a savings of around 100 pounds.

New chassis fairings and longer side extenders do their work to reduce drag. A change to the windshield seal, a sleeker elliptical shape for the mirrors and an integrated antenna further boost efficiency.

That’s the Evolution in a nutshell. But our test truck might well be called the ultimate Evolution, with 6×2 drive, ultra-low profile wide single tires, wheel covers and a trailer with aerodynamic aids created in Freightliner’s wind-tunnel but representative of commercially available products. It is the ultimate you can spec today on top of Evolution 2014.

We’ve driven other truly smart transmissions, but the DT12 is likely the smartest yet. It does everything the best driver can do, but it does it quicker, smarter and, at the end of the day, more efficiently. The direct transmission is backed up by a Meritor final drive of 2.50:1 in the single drive axle to give it the tall gears it needs for the economy with the direct top gear. The tandem is the available Meritor 6×2 setup with a forward drive axle and a load and anti-spin logic to reinforce the drive axle if traction is compromised.

It’s increasingly gaining attention for its 400-pound weight savings and the additional fuel economy from only one set of gears back there. Some fleets – notably Mesilla Valley Transportation – have made this a standard spec on their trucks and are enjoying the fuel savings day in and day out. It is also a spec that’s been proven over decades in Europe, even in notorious spin-out applications such as off-highway logging.

The super singles – excuse me, ultra-low profile singles – are by Michelin. It’s tough to believe they’ve been in the marketplace for 10 years, with over a million produced. That should be enough to convince anyone they work. And not one went flat on the Evolution’s coast-to-coast run, where they were likely as not a major contributor to outstanding mileage, paired with aerodynamic hub covers developed by Jon Fleck. Albert has them on his own truck, and he’ll promote them to anyone who will listen.

In the cab, there’s little new about the Evolution except in the dash and controls, which now include an instrument cluster with gauges in the speedometer and tachometer, making use of otherwise under-used real estate. It puts the coolant-temperature and oil-pressure gauges where you want to see them along with a repositioned fuel/DEF gauge. There are in-wheel switches for engine brake and cruise control, likewise marker light interrupter and flasher. And there’s the new shifter control on the steering column for the DT12.

We were fully loaded sitting in a turnout at Yountville, Calif., facing southbound through the Napa Valley on State 29. It was hot outside, but the 2014 Cascadia Evolution was nicely cool. I was accompanied by T.J. Reed, director of product marketing for Daimler Trucks North America.

With his help I explored the features of the new transmission while negotiating I-80, other divided highways and then some two-lanes through the town of Napa and back through the vineyards of the region.

Starting out, with a foot planted on the service brake I rolled the direction selector to Drive and leaned on the air valves to release the brakes. All there remained to do was to move the right foot and squeeze down on the throttle. There’s no danger of rolling back as a creep and crawl feature gives a slow forward motion without application of the foot-feed. For steeper hill starts, a hill-hold feature commanded by the transmission keeps service brakes applied until a torque sensor tells the air brakes to release. Then off you go, as smoothly as you can imagine.

The clutch is a conventional dual plate with air engagement commanded by the transmission controller. Any time you’re sitting in traffic or at a light with the foot brake applied, the clutch opens. Releasing the foot brake closes the clutch and puts the transmission into crawl mode. From then on, walking on the throttle accelerates the truck according to how much pedal you give.

For medium to heavy pedal demand, the transmission responds well, choosing the right gear for the conditions – including truck weight, which for us was 76,000 pounds – and skip-shifting for the quickest or the most economical acceleration. For instance, in one sequence in “Econ” mode and moderate throttle, the transmission shifted 2, 3, 5, 7 and 8 within about 50 yards and we were off to the races.

In the upshifts, interaction between the transmission and the engine retarder is more complex than just slowing the engine speed between shifts. Initially, the retarder aggressively reduces engine speed, but as it approaches synchronicity with gear and road speed, two cylinders start to fuel even though the other four are still in retarder mode. This keeps the turbocharger spooled up, and when the upshift completes, the engine is more ready to pour on the coals in the next gear.

The advantage of this sequence is to punch the shift through as quickly as possible and also to minimize the torque break during the shift. Thus the truck slows less during the shift. Since there is less roll-off of speed, the feature actually saves some fuel – minute maybe, but still a savings. From a driver’s perspective, it enhances the performance. And remember, we are still in “Econ,” or economy, mode – to get up to speed faster.

In that mode, I noticed shifts for the most part between 1,425 and 1,450 rpms, putting the revs in the next gear precisely on 1,000 rpm to make use of the flat 1,550 lb.-ft. from the 455-hp DD15. Where there is a need for additional performance, there is a kick-down feature at the throttle pedal, which produces a downshift followed by rapid acceleration from the 455-hp DD15. In the performance mode, revs drift up to 1,600 to 1,700, and after an upshift the engine is at 1,300 rpm, where it can make best use of the horsepower curve.

This outbound stretch of highway has regular traffic lights. All seemed to turn red as we approached. No problem pulling down a notch or two on the shift lever for the retarder. As a bonus, the system is sensitive to how much braking is demanded. In the third, maximum, demand position an aggressive downshifting regime brings downshifts to make the retarder work at its peak efficiency. But even without this feature, as you slow for a light or a corner, the transmission downshifts to be ready for the next acceleration demand.

One of the coolest features is e-Coast, where the transmission goes to neutral and the rpms fall to idle when cruise detects no throttle to retain road speed. Truly remarkable is how frequently this feature comes into use. On the coast-to-coast tour early in the year, e-Coast mode accounted for around 25 percent of the total mileage. 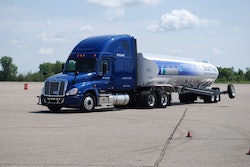 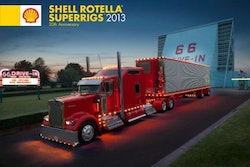 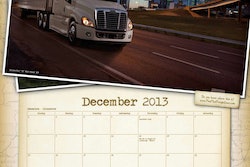