Federal Motor Carrier Safety Administration Associate Administrator for Enforcement Bill Quade, speaking at the annual Commercial Vehicle Safety Alliance Workshop in Louisville, Ky., said the agency will move forward with making the new Hazardous Materials Compliance BASIC (Behavioral Analysis and Safety Improvement Category) public “in November or December” this year. His statements came during a “Life Cycle of a Roadside Inspection Violation” daylong seminar April 22 in which Agency and state law-enforcement representatives, among others, followed violations through their observation during inspection through to their contribution to carriers’ Compliance, Safety, Accountability scores to their effect on subsequent safety investigations, or interventions.

The Hazmat BASIC measurements and percentile rankings today remain private, Quade said, as a consideration to industry: “We said we’d hold it nonpublic for a year because it was a new measure, to give the industry time to adjust.”

The BASIC replaced the Cargo Related category in December of 2012, a change made for several reasons, one being the disproportionate representation of flatbed or otherwise open-deck haulers in the old BASIC. It was one among several Safety Measurement System methodology enhancements that were put through proposal and carrier data preview last year, a process FMCSA Transportation Specialist Courtney Stevenson said during the same April 22 seminar the agency would follow with new enhancements being looked at as priorities this year. Of the first order, she said, were possible changes to the public display of information on the CSA SMS website as part of an effort to pursue several goals.

Reinforcing that the SMS is a prioritization tool
Stevenson said the agency wants to reinforce to the public that the percentile-ranking is “not a safety rating,” as well as further “recognize distinctions between BASICs rankings and crash risk.” During a roundtable discussion capping the daylong seminar, several representatives of motor carriers in attendance made note of the business-world implications of the BASIC rankings — and difficulty improving the rankings in spite of very real, measurable carrier improvement in levels of violations. Stevenson said such considerations were high in the mind of the agency as they consider potential display improvements.

Setting the foundation for the SFD
A “Safety Fitness Determination” Notice of Proposed Rulemaking is expected this year, Quade said, Stevenson noting that the distinction between the concept of the primarily displayed relative percentile rankings versus the somewhat buried — in today’s version of the SMS — absolute measurements was an area of prime display consideration. “For a successful NPRM” to tie SMS Results to carriers’ safety ratings, currently still only the result of on-site comprehensive investigations or compliance reviews, downplaying the general-public importance of the percentile rankings could be a “key consideration,” she said.

“We will base the SFD on absolute scores, not relative scores,” said Quade. “When we do an SFD, we will be setting an absolute standard in terms of targeting our field resources” and providing a clear guide to the public on the ultimate safety fitness of motor carriers.

Addressing the concerns of small carriers
“While we do have sufficient data to assess information on the companies involved in 92 percent of the crashes,” said Stevenson, “there’s a sensitivity where some [members of the public] are interpreting a lack of data as crash risk, but that’s not the case.”

It’s a phenomenon often remarked upon by members of the owner-operator and small fleet community, and Stevenson suggested the agency had taken it to heart and was working toward assessing whether appropriately prominent disclaimers or other solutions would be satisfactory to address it.

However, she added, ultimately the agency wanted to “retain the detailed data that’s available that is bumping demand” on the SMS site today. With 45 million total hits yearly today, it’s certainly an active website. For any big display changes, Stevenson said, a carrier data preview could be expected by year’s end. Carriers and drivers would then have the opportunity to comment on any changes. “We have a commitment that we want to be transparent about where we’re headed,” she added. “We want informed comment – this idea of changing the display, it would involve notification and carrier preview…. We plan to host webinars very close to that preview period — when the carrier preview is turned on, look for notification of these webinars” and participate.

Other priorities for 2013 include: 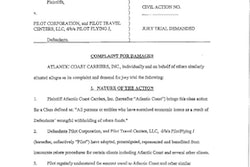