At the end of a long day, we have the option of watching whatever we want on TV, because we’re lucky and equipped with a TV and a satellite in the truck. While both are nice to have, especially in the event of a reset away from home, we rarely use them on a daily basis. Most of the time, George falls out snoring, and I spend the evenings being very quiet and trying not to hurt myself before bed.

Occasionally, he’ll want to watch a movie. I say occasionally because to watch a movie with me has been considered something that needs to be addressed in the Geneva convention, being that it’s sheer torture. I’m not a movie person. Movies last a really long time. Seeing one in a theater is almost unheard of for me. I go about once a year, because the children beg me to. It usually takes them 11 months or so to forget how awful I acted the last time. I think the last movie I saw in the theater was Avatar, and the only reason they talked me into it was because I was hungover and weak from the previous night’s festivities. It turned out to be one of the most horrible experiences of my life — I had no idea it would be a 3-D extravaganza. About the third time I puked into my popcorn, everyone agreed to let me leave without giving me a hard time.

George popped in Hot Tub Time Machine and invited me to come relax and watch it with him. He said it was really dumb, by which he meant that I would like it, and although I wasn’t so sure I liked that reasoning, I attempted to watch a movie with my husband. After 30 minutes of dialogue so stupid it melted the sclera off my eyeballs, I opted to do something else. Like cram jagged glass up my nose.

“I’m going up front. I need to go through my notes.”

“I don’t know if I’m more concerned about the fact that you’ve seen this more than once, or that you really believe it gets better.”

He waved me off with a pfffft, and I went to my throne up front to sort notes. I pulled the curtains up into the windshield, and left the side window cracked so I could smoke. I had all my little scraps of paper out, organizing them as only an insane person could. I guess I was more tired than I realized, because I fell asleep with my head resting on the window and all my little notes in my lap.

I don’t know how long I was asleep before the guy next to us decided to pull out, but his air brakes releasing woke me with a start, and the only thing I saw through sleep-bleary eyes was the writing on the side of his trailer whizzing by the crack in the curtains, which immediately made me think we were rolling backwards. I launched myself over to the driver’s seat and slammed on the brake so hard the cab shook. The pain of breaking my foot on the pedal made me realize we were indeed parked, and not moving at all, but I could not for the life of me figure out where the loud sobbing noise was coming from.

“Oh. My. God. That was the funniest thing I’ve ever seen.”

The sobbing wasn’t sobbing at all, it was George, literally choking to death from laughter.

“Oh gah, please, no more. Don’t say anything else. Ahmagad, when you jumped up, all those little papers exploded from you lap like confetti! Oh, it was funny.”

“I thought we were rolling backwards. I saved our lives, you know.”

“I knew exactly what you were doing, I’ve done it before, but it’s freakin’ hilarious to watch someone else do it.”

“What would you know, you think Hot Tub Time Machine is funny, too. Seriously, my foot hurts.”

So, as I limp around America, I do so with the firm knowledge that I’m funnier than Hot Tub Time Machine. Today is a good day. 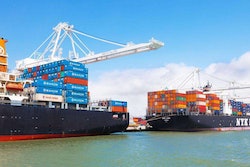