So now that Atlanta doesn’t look like the opening scene of The Walking Dead, it’s time to regroup and tell all the war stories. The big ballers who sit around the counter at the Skillet and try to one-up each other just got a whole new herd of tales to tell.

We rolled through Atlanta on Thursday morning, just as they were getting all the vehicles people abandoned in the middle of the highway out of it. You know, I can understand being caught off guard and running out of gas. I can understand the uniqueness of the situation for the people of Atlanta. What I can’t understand is why in the hell the state didn’t co-ordinate efforts to make the mass exodus from the city a safe and successful one. Someone dropped the ball and screwed the pooch at the same time, and instead of taking it in the gut like they should, they’re busy blaming each other for the problems. Here’s an idea: instead of wasting precious time bitching at each other, why don’t you all get together and make a plan. I know it sounds crazy, but oftentimes when situations are unusual or dangerous, the city and county governments have a plan of action to keep people from freezing or starving to death on the highway. And it usually doesn’t have to involve having the National Guard out.

Drivers all over the South were faced with insane situations this past week. One of our Facebook readers had a story that almost made my head explode with rage. Of course it involved a Walmart, because we know how well Walmart treats truckers.

Scott had a reefer load heading to the D.C. in Brundidge, Ala., that was scheduled for Wednesday morning. Due to sitting in traffic on the ice-bound highway most of the day, he missed his appointment time, but made it to the D.C. He was told to leave and wait for a reschedule. He requested to stay in their yard overnight so he would be on time for his rescheduled delivery, because he was in Alabama and they aren’t capable of clearing the roads overnight and he knew the highway was still a virtual parking lot. Request denied. Company policy, regardless of extenuating circumstances.

He tells the guard the highway is pretty much shut down and he needs safe haven. Request again denied. Scott refuses to leave, citing safety. The guard calls the law. The law shows up and asks the guard what the hell he thinks this trucker is supposed to do. The guard says, “Not my problem.” The cop was unhappy, but unable to force anyone to do anything on private property, so he escorts Scott to safe haven and blocks a road for him so he doesn’t slide down a big hill and kill himself or anyone else at the bottom of it. Scott spends the night at the little convenience store.

He goes back Thursday morning (fighting the ice again) and the same guard from the day before is there. The guy tells him to leave, he doesn’t have an appointment until Friday morning. Scott tells the guard he needs to call the General Manager of the D.C., because that’s what he was told to do if he was given any more problems. Guard refuses to call. Says he doesn’t have to call anyone if Scott doesn’t have an appointment. Scott refuses to leave again and calls the GM himself. When the GM gets the call from Scott, he comes out to the guard shack to see just what in the hell is going on. When he hears Scott’s side of the story, he tells the guard to pack his grip and get the hell out. He then personally escorts Scott to a bay and makes sure he’s unloaded promptly.

While I’m pleased as punch Scott got to see the guy get canned, how many lives were endangered during those two days, because someone had a God complex and a little power? I’m very familiar with Walmart policy on parking and I understand liability. I also understand that there are exceptions to every rule and things sometimes have to be taken on a case to case basis. Even the FMCSA lifts rules when circumstances dictate they need to.

I pray everyone got to their destinations safely, and not too many of you had to spend the night on the highway. While there were some horror stories out there, there were also some real Samaritans, truckers offering food and water to people stranded with little kids, citizens packing a backpack full of peanut butter and jelly sammiches and walking along the lines of cars passing them out. There are decent people in this world, and I appreciate each and every one of them for restoring my faith in humanity.

Now let’s get out there and roll. 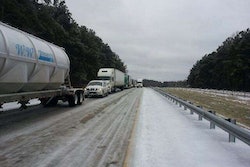