The Federal Motor Carrier Safety Administration Analysis Division Chief Bill Bannister presented the agency’s effectiveness measures and other data relative to crashes involving large trucks at this week’s Motor Carrier Safety Advisory Committee meeting. By and large, Bannister noted, while the continuing improvement in the economy is driving up the overall large-truck vehicle miles traveled nationwide and truck-involved fatalities continue to grow slightly, such numbers follow a huge dip in 2009 as a result of the dramatic recession.

We’ve reported on NHTSA’s 2012 numbers here. For FMCSA’s 2013 enforcement activity, Bannister reported a total of around 3.5 million roadside inspections in which 21 percent of trucks inspected, and 5 percent of drivers, were placed out of service. Those roadside inspection, using FMCSA’s peer-reviewed effectiveness-testing measures, “prevented 16,000 crashes per year, we estimate,” Bannister said, “saving approximately 500 lives per year.”

“In addition,” he added, “we’ve conducted a little more than 18,000 safety reviews of motor carriers.” Approximately 6,000 Notices of Claim (fines) were issued as a result of those reviews, and “770 of those motor carriers were found Unsatisfactory or Unfit,” with 37 imminent-hazard out-of-service orders given as well. As a result of the reviews, “another 1,500 crashes per year were prevented and another 90 lives saved per year as a result.”

All well and good, said Schneider National Senior Vice President and MCSAC member Don Osterberg, adding that the yearly rise since 2009 in truck-involved fatalities has to be “an inconvenient truth for the agency, particularly in light of CSA” and other regulatory activity through that time period.

Measured from 2005, however, Bannister noted, crashes were down, and he added that considerable study had been done on “the relationship between the economy and crashes” in statistics, he said. And while crashes have increased, they are “not to a level to where they were prior to 2009. The rate of increase has tapered off. We expect that that will level off and continue to go down. But with the economic upturn we’re seeing more exposure, more opportunities” for crashes.

A bright spot for the industry and the agency may be the area of New Entrant audits, whose pass rates have been growing in around 10 percent increments between fiscal-years 2011 and 2013 to the point where more than 80 percent of New Entrants passed this past year, FMCSA’s Larry Minor reported. 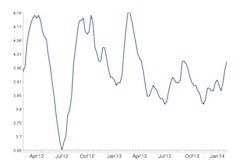