Updated as of August 3, 2020, to reflect the most current information. Find profiles of three relatively new hotshot businesses via the recent 2020 feature anchored at the following link:

Going into hotshot trucking as an owner-operator is in a lot of respects no different from moving into business with a Class 8. The biggest differences lie in the obvious equipment choices given the Class 3-5 nature of hotshot operations. For a leased owner-operator, too, getting used to operating under your own authority and bearing those added costs and procedures is key.

Establishing the business
When it comes to regulatory requirements, interstate hotshot businesses face many of the same regulations as those of interstate Class 8 haulers.

It’s possible to lease your hotshot to a larger entity, particularly if you’re in an area with a lot of oil drilling, but most hotshot businesses operate with their own motor carrier authority, requiring well less than $1,000 for federal and state filings at startup. The biggest initial cost, unless you’re leased, is buying at least $750,000 worth of primary liability insurance coverage, a requirement to run interstate.

The good news is that insurance coverage may generally cost a little less than what a Class 8 truck owner-operator typically pays. The bad news? It’s unlikely to cost much less, and depending on your situation and your equipment, you might pay more.

Unless you’re able to lease to a business, you’ll need your U.S. Department of Transportation motor carrier authority and all that entails, including that primary commercial auto liability insurance, membership in a drug and alcohol testing consortium, required driver qualification filings, adherence to hours of service regulations and the like.

Operators who remain plated under 26,001 pounds can avoid filing quarterly IFTA reports and purchase fuel according to the best pump price available. You’ll need only to file via your BOC3 Process Agent in the states where you’ll be doing business.

Like the IFTA requirement, a commercial driver’s license is necessary for combination haulers using typical hotshot pickups only if the plated GCWR exceeds 26,000 pounds.

For more specifics business start-up, read this updated guide to running an independent owner-operator business, including a guide to establishing authority and getting the business up and running.

Spec’ing the equipment
You won’t get the biggest amount of payload from a standard tow hitch on the bumper. Most OTR hotshots a hitch capable of accommodating various gooseneck trailers, many with actual fifth wheels positioned either inside standard pickup bodies or flatbeds built onto the cab & chassis.

If your setup is like hotshot hauler Greg Cutler’s was when this piece was written several years ago, with a 20-ft. Doolittle bumper-pull trailer with a 2-foot dovetail at the rear, the trailer payload maximum will be under 9,000 lbs., as the trailer weights 9,100 lbs. It’s possible, however, to carry much more weight, as the stories at this link show.

Spec to the load: You may not need all the pulling power that the big three auto manufacturers have to offer with their pickups. Atlanta-based hotshot owner-operator Jeff Ward launched his business years ago with a 2008-model F450 Super Duty dually, with maximum weight up to 35,000 lbs. He later downsized to a 2012 F350 tagged at 26,000 lbs. GCWR, largely for fuel mileage: the 350′s was then more than 4 mpg better than the 450, which typically logged about 8 mpg.

The Cadet flatbed body on the unit Ward spec’d had a gooseneck-type hitch, similar to what was on his previous 450. The majority of his moves were bulky enough to necessitate the 30-foot P.J. flatbed, but as do others, he felt the flatbed body delivered more versatility over a standard pickup bed, with more lateral space for freight. Some of his more local loads were light enough, too – 3,000 pounds or less – to fit on the flatbed alone, improving fuel mileage sometimes up to 18 mpg or more.

Maintenance costs: If you’re accustomed to the preventive maintenance intervals of a Class 8 diesel, be prepared as a hotshot operator running a lot of miles to accelerate oil change schedules and other component – and truck – replacement. Ward changed his oil every 5,000 miles at a cost of about $100 a change. The P.J. trailer’s tandem axles were outfitted with single tires at each axle end, saving weight, each rated at about 7,000 lbs. of potential capacity, more than he needed given his heaviest possible load today was just 10,000 lbs. As noted, he’s tagged at a combined maximum weight of 26,000 lbs.

Running a non-dually Ford F250 for five years as a hotshot, Kevin and Sue Nelson of Straight Forward Transportation in past saw wear accelerate through the unit. “The brakes are electric, and you go through rears like crazy,” said Sue.

They’d replaced the clutch and also had “gone through three sets of brakes since we started this business” five years earlier, she added. “We had the truck for years before that” running outside of a commercial business “and did not have those kinds of problems.”

Explore pros and cons of hotshot trucking with this July 2020-published feature series.

Six of the nine actively working trucks detailed at least in part in Overdrive‘s 2020 hotshot-trucking feature reporting were from a single manufacturer, Dodge with its Ram Trucks units. Chevrolet and Ford, however, were also both represented and are favored by plenty hotshot haulers.

Find links to coverage and towing test drives from recent history written Tom Quimby for Overdrive sister publications HardWorkingTrucks.com and Equipment World. Click through each of the images for the stories.

Search these trucks’ models on HardworkingTrucks.com for more detail on each. 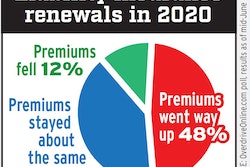 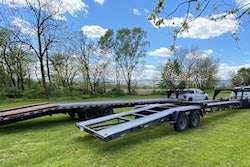