Owner-Operator Independent Drivers Association Regulatory Affairs Director Scott Grenerth briefed Overdrive Friday, January 30, on a brand-new resource he hopes truckers around the nation will participate in to help themselves as well as their fellow haulers best identify quality medical examiners around the nation.

OOIDA’s D.O.T. Doc medical-examiner review and search site went live just around a week ago, Grenerth says, intended to grow into a resource drivers can use to share their experiences with each other relative to medical examiners around the nation.

“We’ve been keeping the FMCSA very well informed of the problems our members are encountering” during DOT physicals, he notes, from overzealous test referrals as a condition of certification to irregularities in treatment of conditions like sleep apnea around the country, a phenomenon Overdrive has reported on extensively within the last year.

While the association is still preparing its response to FMCSA’s recent bulletin to medical examiners on the apnea condition, Grenerth did note that “we are not happy that they still are not doing a proper rulemaking” to settle the details of how the condition should be handled. As of now, as reinforced by that bulletin, the particulars of drivers’ medical certifications relative to the apnea condition — from appropriate medical certification length and screening criteria for testing to just what sort of conditional certification may be available while a driver is tested — remains the professional judgment of the examiner, with much variation possible.

And “things are not being uniformly enforced,” Grenerth says. The D.O.T. Doc site is “our response.”

Emphasizing DOT exam prep
The new site contains a section headed “Prepare for a DOT physical” in which the association shares a few “lessons we’ve learned ‘from the school of hard knocks,'” Grenerth says, consulting with OOIDA members as well as regulators. As has been reported elsewhere, the page advises that truckers visit their family physician at least 30 days ahead of their DOT physical, allowing time for potentially needed testing.

“If you think you may have a problem passing any aspect of your exam,” Grenerth says, “don’t wait to find out from the medical examiner. I view it as an insurance policy – a CDL is all but completely worthless without a medical card.”

Drivers who want the “ultimate level of insurance,” he adds, should make that pre-DOT physical check-up appointment with “somebody who is actually on the National Registry” of Certified Medical Examiners. “Then if you go to somebody who is a real jerk,” you’ll have documentation in hand from a NRCME-certified doctor showing another viewpoint.

In prior reporting, driver and Truckers for a Cause cofounder Bob Stanton called such an approach a kind of “preventive maintenance” of your medical certification. As a driver treated for sleep apnea and on a one-year medical certification for many years, Stanton routinely visits with his personal doctor before heading in for a DOT physical.

Second opinion: The truth shall set you free
Grenerth also emphasized another item in the preparations section of the D.O.T. Doc site — that a second opinion on a DOT physical, contrary to what company and/or leased drivers are sometimes told, is well within the bounds of the law, with some caveats.

Drivers can access a statement on the subject from the FMCSA’s own Chuck Horan at this link. In essence, for a driver with two contrary medical opinions relative to a condition on file, for FMCSA’s purposes it defaults to whatever certification is current as long as the driver is not shown on separate forms to have lied about some portion of medical history.

Ultimately, Grenerth hopes this message gets out to company drivers and owner-operators whose carriers require them to use certain physicians or occupational health clinics for their certifications.  “Company drivers often aren’t able to choose where they go to get their physical,” he says. “Part of the reason for that is [the old problem of the] ‘guaranteed to pass DOT physical’ – that was a real problem, a legitimate problem the FMCSA has solved with the National Registry. This is not a problem anymore. They got rid of that 100 percent.”

Now, however, “we have multiple cases where the driver went to the company-mandated clinic” and had a bad experience, whether a withholding of certification pending an ultimately unnecessary apnea test or something else. “There’s nothing wrong with a second opinion as long as you’re not lying. Folks who’ve been told they have to go one way or nothing — that’s been a big frustration for us.” The fact is, “if a carrier says no you can not get a second opinion, that’s just not the case.”

All reviews wanted
Grenerth noted that for the review site to be truly useful, operators will have to use it — and not just for sharing bad experiences. “I’m really glad to say that 90 percent of the reviews we have gotten so far are good reviews,” he says, “and they include places where you can actually park your truck.”

One reader review noted a location that offered physicals during regular hours for a mere $55 — “amost unheard of,” Grenerth says. 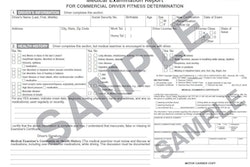