The Securities and Exchange Commission announced April 1 that Navistar International Corp. agreed to pay $7.5 million to settle the criminal investigation into whether the company intentionally misled investors about its progress in meeting 2010 emissions standards.

The SEC also announced April 1 it has brought charges against former Navistar CEO Dan Ustian, claiming the truck and engine maker’s former boss misled investors about the company’s ability to meet those standards.

The SEC and Navistar say the settlement does not signify Navistar’s admission or denial of the accusations. In a statement to Overdrive, Navistar says it was “time to put the matter behind” it.

“This settlement was in the best interests of Navistar and its stockholders,” Navistar told Overdrive. “Settling this matter will avoid the expense and distraction of a potential dispute with the SEC and allow us to continue our focus on building and sustaining momentum on behalf of our shareholders.”

The SEC, however, claims Ustian and Navistar applied for the certification despite knowing its engine didn’t meet the standards set by the EPA.

The company filed for certification in what the SEC says was a misleading attempt to reassure its investors that its exhaust gas recirculation strategy would work. The SEC claims Ustian intentionally misled the company’s shareholders about the EGR strategy’s ability to meet 2010 standards.

All other North American truck and engine makers used a different strategy, the diesel exhaust fluid-based selective catalytic reduction system, to meet 2010 emissions standards. Navistar, however, strayed from the pack to pursue its EGR-only approach, a strategy it eventually abandoned in favor of SCR in late 2012. Ustian stepped down from his post as CEO in 2012.

Navistar announced in September it had received notification from the SEC about looming charges.

Despite the settlement of the criminal charges, Navistar, Ustian and the company’s former CFO are facing civil lawsuits making accusations similar to those by the SEC. Navistar is also still facing civil suits from trucking companies claiming Navistar knowingly sold heavy-duty diesel engines whose longevity was suspect, given the heavy use of EGR. The EPA has also filed a lawsuit against Navistar over its 2010 emissions strategy. 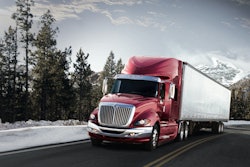