We’ve all known or seen that one parent/child relationship where the parents allow the child to run the show. I’ve written about it a couple of times in the past — it’s a peeve of mine and I’m fairly certain the general decline of human civilization can be accredited to it.

I was a kid in the late 60s and early 70s. We lived in Atlanta in some pretty cheap apartments while my dad went to school at Georgia Tech. Being close to the college and in cheap housing, we had a lot of hippies living close and there was a lot of “free parenting” going on. This was back when you played at the playground with everyone outside in the actual sun, and your moms hovered around the edges and talked to each other, and people who had different ideas and beliefs lived close to each other without making federal court cases about who or what was more important. They just wanted a safe community where they could let their kids play together on the playground, under the actual sun.

Anyway, I remember this kid named Sage, and his mom let him do whatever the hell he wanted to do. Sage could say the entire family was only going to eat mushrooms for a whole day, and by God, the whole family would eat mushrooms all day – and not the fun kind. Consequently, Sage was a jerk of the highest order and no one on the playground liked him, which made him act like even more of a jerk. Looking back, I realize this wasn’t Sage’s fault, but the kid had a hard time because his parents believed his “inner spirit and creativity” would guide him to the right decisions in life. Come to think of it, they probably were eating the fun mushrooms, which is why they allowed and supported mushroom day as decreed by Sage’s inner spirit.

The point is, human beings need guidance. They need to be told what’s acceptable and what isn’t, and they need to have this behavior demonstrated to them. It’s highly preferable to society in general if these mimicries are adapted at a young age, but let’s face it, there are some who stumble through to adulthood without being ever actually shown what’s acceptable. Unfortunately, they’re the reason we can’t have nice things, but that’s our own fault, and you know why? Because there are more of us than there are of them.

We need to get over the defeatist attitude of, “We can’t park because of filthy truckers,” and replace it with, “We’re not filthy and we’re policing the ones who are. There are more of us than there are of them.” That attitude needs to be supported by actual enforcement of litter laws – the public lots (shout out to Long Island for the shut out of truck parking at the public rest area altogether — way to support safe driving) are packed every single night. You can’t tell me a cop couldn’t roll through and clean up on litter tickets. (That was quite unintended, but see what I did there?) And we all know everyone is watching when the po-po shows up, if they actually see someone getting slapped with a fat fine for being a dirty butt, they’ll think twice about being one. Money talks, which is why I don’t understand the lack of enforcement of what seems to be pretty easy revenue.

Lead by example. Be proud enough of what you do to put a shirt on before going inside the truck stop. Get a truck number and report people when you see them throwing their personal waste in the parking lot. It’s an unfortunate state of affairs when things like this have to be done, but we can either sit around and feed into the stereotype by allowing the unguided children to run the show, or we can train them to be truckers, and find out which ones can handle it and integrate with pride and a positive image. Take time to make your community on the road stronger and safer from within by culling the bad apples and giving much needed help and advice from experienced professionals to the rookies who really do want and need it. They’re out there, and it’s our job as an industry to make them better. 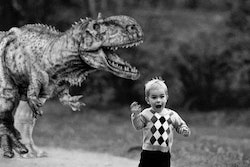