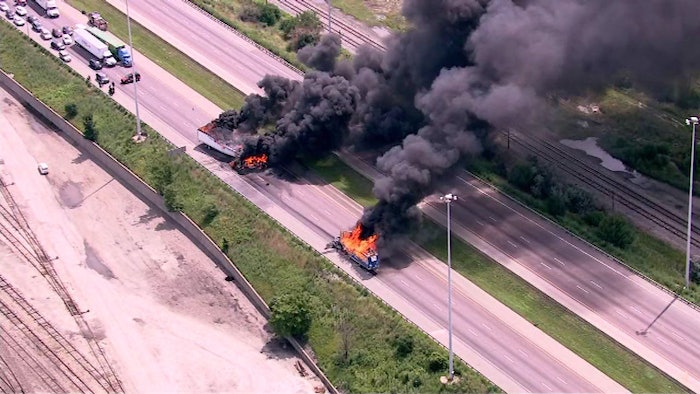 TRAFFIC ALERT: Outbound I-55 shut down at Cicero due to truck fires – https://t.co/QgtCmUgIBD pic.twitter.com/WmWhWLc2KK

An accident involving two tractor-traoilers and multiple cars on I-55 in Chicago near Cicero resulted in one fatality, according to reports from ABC 7 Chicago, and halted traffic on both sides of the Interstate for hours.

The news station said the two trucks collided at approximately 10:50 a.m. Monday, and both burst into flames. Illinois State Police told ABC 7 one of the trucks was hauling 17,800 pounds of paint – a hazardous material. The other truck was hauling frozen meat. The crash also involved three cars.

I-55 was closed in both directions for nearly three hours. All northbound lanes of I-55 were reopened around 4 p.m., and the southbound lanes didn’t reopen until 12:05 a.m. Tuesday, according to ABC 7.