YouTubers getting the attention of new truckers

Ever meet someone and just hit it off so well you feel like you’ve been friends forever?

Will “Lil’ Dawg” Kling and Matt “Little Guy” Eso experienced something of the same when they met through work a little over a year ago. They found not only commonalities in their hobbies as YouTube contributors, but in that they both served in the Navy, have young families they’re crazy about and a common desire to entertain and inform the trucking community.

Each had their own following of subscribers before meeting, and found they played well off one another. In the course of their combined efforts throughout the past year, the two have found a definite following among the next generation of truckers. A combination of humor, educational tips of the the trade, and real-life representations of life on the road are presented in a manner that seem to attract and hold the attention of the 18-30 age demographic, in multiple social-media platforms this group supports and uses heavily.

Through another friend and YouTube performer, Eric Cornelius, also known as “Eric the Singing Trucker,”  Matt and Will found Traveloko, a small outfit out of Antioch, Calif., and recently embarked into the wide world of lease-purchase owner-op small business. Their social media pages and YouTube channels have thousands following along in their journey, and they’re not shy about presenting the bad with the good. It’s not sugar-coated recruiting material, but it does show that if you’re willing to work and put some ass into it, you can own your own business and provide for your family. Finding the right place to do it and finding a support system is what Eso and Kling hope to impart with the information they produce.

When asked specifically why they do what they do, Kling gave the long answer: “We want new people coming into the business, or following because they want to eventually get a CDL, to know they can find friends and learn from each other and be successful. It doesn’t have to be all this impersonal, Rambo-trucker stuff. We can have the same kind of camaraderie they did when my grandpa was a trucker. We just use different platforms. We’ve got a lot more than a CB.”

Indeed they do. Each is operating a brand-new Volvo with all the bells and whistles a great majority of the new generation in trucking will be looking for. Technology is not only a fact in the industry these days, it’s also a draw. Kling has a unique perspective on the differences in “old school” trucking and trucking of the future. His grandfather was lifetime driver, and Will spent a lot of time on the road with him as a kid, during the glory years of trucking. He understands why there’s a gap between the generations, and hopes that he and Matt can help bridge it with their humor and content.

Matt explained their mission statement — in a strong New England/Jersey-ish accent very appropriate for someone called “Little Guy” — with a lot more brevity: “It’s funny. It’s at least funny to us, and it helps driver separate their day and relate to what other people are feelin’ a little.”

The future of trucking will most definitely be technology-driven, and whether or not anyone wants to admit it, it won’t be too many years before there aren’t any manual-tranny, stacked-up, Jake-rattling Freightliners or Petes or K-dubs anywhere but in museums and at truck shows. This will change the look and the technical dynamics of the profession as much as cell phones and social media have already changed the communication capabilities. It’s a brave new world, folks, but it doesn’t have to be scary, and you’re not alone. 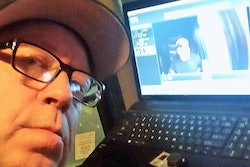 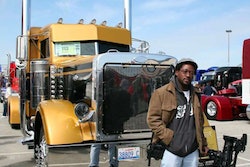