David Zelsdorf, of Albertville, Ala., was named the winner of a 2019 Western Star 5700XE in the Landstar All-Star Truck Giveaway earlier this month.

Zelsdorf’s name was selected in a random drawing that started with 989 eligible Landstar owner-operators. He was one of eight semi-finalists for the truck. Pilot Flying J and Western Star are sponsors for the annual giveaway.

“I just sold my 2002 Kenworth T600 on Monday,” Zelsdorf says. “It was a good truck, real dependable, and it didn’t have too many miles on it. But I really like this truck so far. It’s a great truck. It rides good and runs good.”

The new Western Star is powered by a 14.8-liter, 500-horsepower Detroit DD15 with a Detroit DT12 automated manual transmission. Zelsdorf, 71, says the biggest adjustment has been going from a 13-speed manual to a 12-speed AMT. The truck is also the first new truck Zelsdorf has owned in his 42-year trucking career.

“I’m still raising my left leg looking for the clutch and moving my arm over looking for the next gear,” he says. “I’ve never driven an automatic in my life, but I’m beginning to really love it. You just accelerate, and it takes over. It’s a smooth-shifting truck.”

He adds that some of his favorite features on the truck that his Kenworth didn’t have include the more powerful engine, the tilt steering wheel, refrigerator in the sleeper and bunk beds, so his wife, Patty, can ride with him if she wants.

Zelsdorf leased on with Landstar in 1997 and was named a One Million Mile Safe Driver with the company in 2007. He typically hauls a dedicated hazmat load from Birmingham, Ala., to Evansville, Ind., a couple times each week. 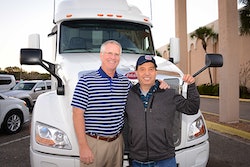 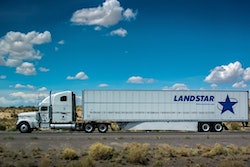