Truck-themed Christmas parades bolster charities in some communities, where they became annual events as early as 1960 and as late as 2015.

Parade organizers generally donate proceeds from entry fees and contributions, such as non-perishable food, to organizations that help local families. As many as 15,000 spectators have turned out for one of these events, which are often followed by lighting the city Christmas tree and other holiday activities.

Although the Gualala, California, Lighted Truck Parade was Nov. 24, earlier than other Christmas parades, it has drawn as many as 2,000 onlookers, the equivalent of the town’s population.

New to this genre is the third annual Truckers’ Toy Drive parade, which aids the Boys & Girls Club of Las Cruces, New Mexico. Participants donate a toy to enter the parade, which begins 10 a.m. December 1 in Vado and ends Las Cruces.

While Northern California offers three such parades on December 1, only the Paradise Truck Parade of Lights limits entries to trucks. It starts at 6:30 p.m. and serves as a canned food drive for local food pantries. In Mendocino County, Fort Bragg’s Lighted Truck Parade became the Holiday Lights Parade to reflect a broader focus. It is set for 7 p.m. and benefits the Mendocino Children’s Fund. The county seat of Ukiah will host the Parade of Lights at 7 p.m. after combining the formerly separate events of the Downtown Holiday Parade of Lights and Truckers Light Parade.

The state’s Humboldt County offers Fortuna’s Electric Lighted Truck Parade at 7 p.m. December 7 and despite the name, admits a wide variety of entries. In Eureka, the county seat, up to 100 trucks annually form the Truckers’ Christmas Parade, which celebrates its 38th year 6 p.m. December 8.

In Oregon, the 25th annual Timber Trucker’s Light Parade begins at 5 p.m. in Riddle and ends in Myrtle Creek. As many as 70 trucks have participated in past parades and some have boasted up to 50,000 lights. Southwest in La Pine, the former Truckers Light Parade, now the Christmas Lights Parade, begins at 6 p.m. Dec 8. 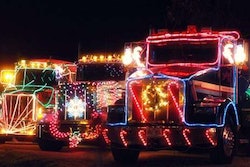 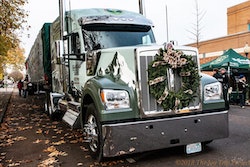 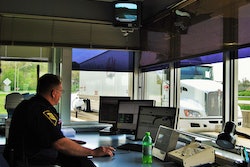